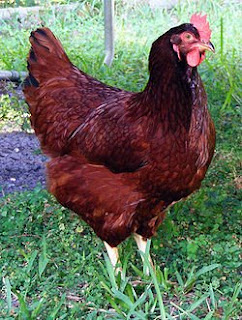 I’ve never been overly fond of live chickens. And because I grew up in Los Angeles, I never had the opportunity to acquire one as a pet. That is until recently. The only other writer I know who admits to having chickens as pets is Helen Ginger, who had six of them until her mother reportedly fried them for dinner.

My pet chicken was nearly pecked to death by others in her flock, so we rescued her. We didn’t think she would survive, but placed her alone in a dog run with a small igloo dog house. Somehow she managed to pull through and regrow her feathers. In fact, she did so well that she’s now as fat and sassy as any Rhode Island Red you’d ever care to meet.

We call her Woodstock, or Woody for short, because she and our Australian Shepherd really hit it off. “Snoop Dog” (Snoopy) heads straight for the dog run every morning where she and Woody greet one another like old friends. Woody has tried to dig out from her enclosure with Snoopy’s help from the other side, forcing us to reinforce the border with bricks and large stones. What would happen, we wonder, if one of them actually digs in or out of Woody’s pen?

Last winter we were worried that Woodstock might freeze to death in her doorless igloo, so we covered it with an old, heavy quilt. The quilt was still there not long ago because our spring weather has been exceptionally cool. When my husband went out to feed her, Woodstock was nowhere to be found. Was there a chicken thief in the neighborhood or had one of the neighbors’ cats managed to get inside? 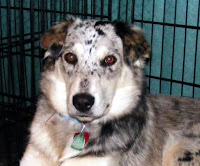 We searched everywhere but couldn’t find a single feather. My husband then thought to look under the old quilt that slid from the igloo and formed a large clump. There she was, sitting on eight eggs that she had managed to hide in a hole just big enough to fit into. She was so glad to see Bill that she pecked him repeatedly. I guess it’s time to acquire a rooster.

Each winter a large flock of small birds makes our backyard home where they live off the chicken feed. Woody allowed them to cohabitate with her in her igloo for a while, probably thinking they were her chicks. But when the tiny birds grew large and fat, she unceremoniously booted them from the nest. It was hilarious to watch as many as twenty birds fly from the igloo with Woody in pursuit.

Now that it’s finally getting warmer, Woodstock hops on top of her igloo to survey her surroundings as though she were queen of the hill. After a few minutes she hops down and goes back to work scratching up her yard as though a farmer preparing a spring crop.

Woodstock's a friendly fowl although some of her breed have been known to attack animals and small children. According to the Wikipedia—I'm a research junkie—the Rhode Island Red is a utility bird, raised for meat and eggs as well as show. And speaking of eggs, I’ve never seen one as large as Woody’s, when she’s not busy hiding them. They're too large to fit into a jumbo egg carton and they rival duck eggs in size. Those giant, brown eggs are the best I’ve ever tasted.

The Wikipedia says that Rhode Island Reds are a popular choice for backyard flocks, so they must be someone else’s featured pets.
Posted by Jean Henry Mead at 12:01 AM

Woodstock and Snoopy!? As an old Hippie who grew up on Charlie Brown, I just gotta LOVE those pet names!

My pet chicken was named Greta. She was off limits, come frying time!

I too love the homage to Charlie Brown and the Peanuts gang.

I'm a Charlie Brown fan as well. And, Beth, no one gets near Woodstock with a carving knife. :)

I'm glad Woodstock is fine:) Lyne and I go to the Western Stock Show every year and her favorite part is seeing the chickens. They're pretty fun, but would never be compatible with Maxx (AKA King Fooafooapeepeepoopoo)

Mark, I also like to visit the chickens at the state fair. There are so many exotic breeds and they are fun to watch. Woodstock has her own little two-step dance that she does and I can never grab my camera in time to record it.:)