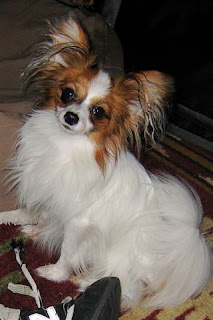 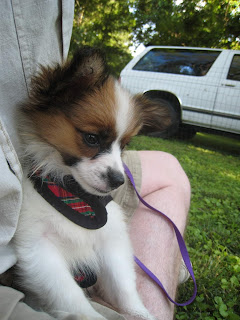 With poor Maxx sharing the trials and tribulations of a foo-foo dog who gets no respect, it seemed like a good time to share the latest news on Luca the papillon (a.k.a., His Lordship of Eternal Cuteness, Light of a Thousand Suns).

Lately, Luca has seemed a bit subdued, maybe even a bit depressed, a condition Mike and I attributed to loneliness during the workday. With Karma gone, there's nobody to keep the little guy company while we're out earning the kibble except Edgar the cat, who is a lovable boy, but not, in His Lordship's estimation, a suitable playmate for a canine of such elevated esteem.

Of course, being the loving parents that we are, we decided that the solution to Luca's problem would be a little brother or sister. Even though there is still a Karma-sized hole in our hearts, we found the perfect playmate, a twelve-week-old papillon female we named Willow. She is a love. That's Luca on the left and Willow on the right. Don't they look like they were made for each other?

Their first meeting went very well, and His Lordship was every bit the gentleman (despite having to overcome a badly executed summer haircut). He looked slightly askance when she rummaged through his toybox but didn't assert his royal prerogative until she overstepped her bounds and went for the highly favored beef throat. He seemed to enjoy having her company, though she is a bit boisterous for his delicate sensibilities. Then, today, he seemed to come to an appalling realization: she wasn't a guest. She was going to live here.

Here, in his very own house, with his very own people, this rowdy little ruffian with the Ethel Merman voice was digging in for the long haul. Oh, he's still mostly a gentleman about it, but his company manners are beginning to slip, especially when the little interloper pulls on his tail or--oh, the horrors--his ear fringes. Fortunately, their first session with Brigitte Sclaba (our freestyle trainer) has already been scheduled, and Willow will be attending a class in good manners with our other trainer, Peg Harrington (of The Happy Hound).

As for me, I'm embarking on a whole new adventure. Mike has always been a wonderful dog daddy, but I look back at some of the mistakes I've made in the past and hope I've become a better dog owner with each one we've lived with. I've loved them all with all my heart, but Luca has taken me to a different level. Working with him has been an absolute delight, teaching me so much about positive training methods. I'm improving my timing with the clicker and working at keeping my energy level high enough when I train. Now things are going to get really interesting. How many hands am I going to need? If I'm trying to capture a behavior and one dog does something cute, how will they know which one is getting the click? I have a million questions, and the most pressing is this: how do I give Willow everything she needs without diminishing my bond with Luca?

Before I got Luca, I had the usual anxiety dreams--forgot about an important exam, did a perfect Act I only to realize we've never practiced Act II, suddenly realized I've gone to a class in my underwear. After I got him, all my anxiety dreams were about him. I'd turn around in a crowd and realize he was gone, then catch sight of him in a sea of people about to tromp him, or he'd be weaving among the feet of a herd of Clydesdales, or we'd be at an aquarium, and giant frogs would be trying to eat him. My friends laughed and said they had the same kind of dreams when they first had their children. The dreams lasted for several months, and finally, they stopped.

Then, last night, I dreamed that I was in a labyrinth that I later discovered was some sort of ultimate Wal-Mart. One minute, Luca was with me, and the next, he was gone. I spent the remainder of the dream searching for him, catching occasional glimpses, but never actually recovering him safely. I don't have to delve too deeply into the old subconscious to know what that means.

Love and loss are hopelessly entwined. In every beginning is its end. But maybe that's part of what makes it so sweet. Wish us luck!
Posted by Jaden Terrell at 10:22 PM

There's nothing that can help ease the pain of losing a beloved dog than to adopt another. You have two absolutely adorable pets, Beth!

Thank you, Jean. We're having a great time getting to know each other.

Beth, I'd like to share a note that Dean Koontz sent me after we lost Lucy last September:

"There is nothing to say about such a loss. Even for me, there are no words adequate to describe it. But because your Lucy, like all her kind, was an innocent sould, not fallen as we are, I am certain that a moment after death, she woke in the company of God."

I cherrish Dean's note, but even today,I cannot read it without my eyes welling. While Maxx has brought Lyne and I so much joy, as has Anna to Dean and Gerta, and Willow to you, no dogs could ever replace Trixie, Lucy, or Karma.

I wish you the best with Willow. I'm sure she will fit in well.

Mark, your post brought tears to my eyes. Dean's words are oh so true; it was kind of him to share them with you, and kind of you to pass them on.

I read Dean's book, "One Door Away from Heaven" awhile back and thought he must be a wonderful man, to think so highly of dogs.

Dean is one of the most honest and compassionate people I have ever had the pleasure to meet. A very private person, few will ever know that about him. Thankfully, Trixie and Anna speak for him. Dean's generous donations have helped countless animals and humans alike. Not to offend any cat owners, but there is a reason that dog is God spelled backwards.

What darling dogs! Have fun with them.

They look pretty small. Are they lap dogs?

Mark, I'm a cat lover and a bird lover as well, but I agree with you about dogs. They're remarkable creatures.

Pat, yes, they're very small. Luca is about six pounds. Willow will probably be a little bigger when she grows up; at three and a half pounds, she's a pound heavier (and quite a bit taller) than he was at the same age. Papillons are a lovely breed, very adaptable. They like a good snuggle, but they also love to learn. Luca enjoys his dance classes, and Willow is already learning to sit on command and to stand up and balance on her hind legs.