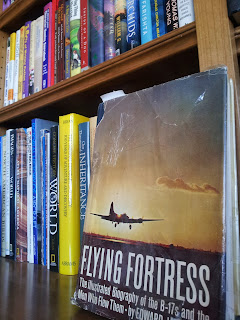 I dare say that everyone has a book they cherish for one reason or another.  When I was a kid, I loved airplanes and never missed an episode of 12 O’Clock High, so it's no surprise that Edward Jablanski’s book, Flying Fortress was mine.  I loved that book, and not one single page was ever nicked or bent – until my mother loaded it out without asking.  Granted, not many kids cherish books, so what’s the harm?  I was crushed when my book came back severely damaged.  I pleaded for Mom to make the kid who damaged it replace it, but that never happened.  As you can see, I still have the book and its memories.

Not long ago a dear friend sent me his cherished book, which ironically is about another World War II bomber.  In fact, Bomber is Len Deighton’s title, featuring a Royal Air Force bomber’s last flight over Germany on June 31, 1943.  In this case, the book is in shambles because it’s been read so many times, but its words and message remain as powerful today as they were the day it was published.

That’s the beauty of words.  For those willing to take the time, they evoke meaning far beyond the pages of which they were written.  Bomber and Flying Fortress both take their readers to the flak infested skies over Germany, letting them feel the fear as bullets and shrapnel rip their airplanes apart.  And after the raid, fighters swoop down from the sun before to pick off the less fortunate stragglers.  For the bombers that made it back, meat wagons await them to haul off the injured and dead, then the planes are hosed out and patched up for their next mission.  The photos in Flying Fortress validate the stories in the book.  I am still in awe of the scope of World War II.

While every novelist strives to create meaningful work, it often gets lost in translation.  Sometimes authors try so hard that not a word gets written that day.  Some call this writer’s block, but the fact is not everything works.  Whenever I reach that point, I stop and take a break.  Picking up a good book can provide great inspiration to get me back into writing.

Now, consider your favorite book – the one you cannot part with.  Which one is it, and why does it stick with you?  Was there an experience that went along with the book or were the words that compelling?  To this date I cannot explain why Flying Fortress is still so important to me or Bomber is to my friend, but I shall always cherish them.

Great piece, Mark. I like B-17s too. In fact, I bought a model of one a while ago, also a P-51 Mustang, but haven't been able to find the time to build them. But I'd have to say my two favorite books are The Razor's Edge by Somerset Maugham and The Count of Monte Cristo by Dumas. The former because I relate to the character of Larry Darrell on a lot levels, his disillusionment after the war (WWI), and his search for peace and meaning in life. And the latter because it's the ultimate revenge story and revenge is so satisying. -- Paul D. Marks

Paul, the best thing about books is we can get lost in them, and in many ways, live out our secret lives -- if only in our heads. :)

I enjoyed the post, Mark. I have several cherished books that I won't loan or part with. I think most writers would love to produce a book that others consider a cherished possession.

I totally agree, Jean. Hearing that someone cherishes a book you have written would be better than winning the lotto.

A cherished book would have to be The Secret Life of Lobsters: How Fishermen and Scientists Are Unraveling the Mysteries of Our Favorite Crustacean by Trevor Corson...and who would have thought that they were so interesting! The book is a fascinating mix of research with scientists and fisherfolk, and an intimate look at the fishing communities in the Gulf of Maine. The book is beautifully written, and I left the pages with a small understanding and deep appreciation of the complexities of the lobstering industry. If you're going to read this book...also read David Foster Wallace's article "Consider the Lobster" that was published in Gourmet magazine in August 2004. It was a commissioned piece and not what they were expecting, but they published it anyway.

Lyne, your comment confirms how cherished books impact our lives. It's stunning to think how well-chosen words can have such impact.