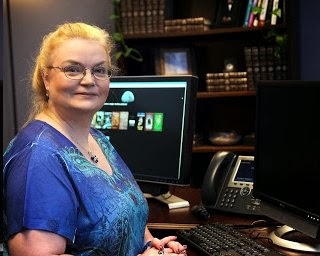 A Guest Blog by Stephanie Osborn

The first thing you should know is that I really am one of those rocket scientists you hear about. With degrees in four sciences, subspecialties in several more, I worked in the civilian and military space industries, sitting console in control centers, training astronauts, you name it; I lost a friend aboard Columbia, when she broke up over Texas. So yeah, I’m the real deal.

The second thing you need to know is that I’ve been a Sherlock Holmes fan since I was a kid. Someone gave me a copy of The Hound of the Baskervilles for my birthday. I was in third grade. With a hyperactive imagination. Scared me witless. But I loved Holmes immediately.

In high school, I discovered that big, single-volume compendium ― you know, the one with the rust-and-mustard dust jacket? Wagged it around to class, and every time I had 2 consecutive spare minutes, my nose was in it. I was devastated when I read The Final Problem. And I could have turned handsprings for joy when I read The Empty House! Over the years I picked up “pastiches,” too, and television and movies ― I watch the BBC’s Sherlock, CBS’ Elementary, and the films starring Robert Downey, Jr. I have the complete set of the Jeremy Brett Grenada series, and a bunch of the Basil Rathbone films. Back in Arthur Conan Doyle’s day, they didn’t break down literature into genres like today. Today we have science fiction, fantasy, horror, etc. But in the Victorian era, they were lumped together and considered speculative fiction, or “specfic.” Many if not most of the Holmes adventures would be considered specfic ― and I started thinking…

…Other people have “done” Holmes in Victorian-era science fiction...but I want to be different. If I write Holmes, I want to do something that’s never been done before…Aha. What if I managed to drag Holmes into the modern world for adventuring? Hm. How to do it…I dug into possible scientific theories. Then it hit me. What if I use alternate realities, and I combine that with M theory to access them……I was off!

I had several novels written but unsold, and publisher interest in the first, Burnout: The mystery of Space Shuttle STS-281. (Mixing science fiction and mystery comes naturally; to me, a good SF story has a distinct element of mystery, hence my “title.”) So I sat down to write The Case of the Displaced Detective, the first complete story in the series that’s described as, “Sherlock Holmes meets the X-Files.” I did so much historical research, I published my own ebook JUST on Victorian drug use, Sherlock, Sheilas, and the Seven-Percent Solution.

Two months later, I’d completed the rough draft…at 215,000 words. It was like holding a wide-open fire hose, alone. I couldn’t stop until it was finished. But it was too big for a single book. So my publisher and I made two volumes of it, The Case of the Displaced Detective: The Arrival and The Case of the Displaced Detective: At Speed. There’s not a hard and fast break between the origin story (how Holmes gets to the modern day) and the mystery (who’s trying to sabotage Project: Tesseract and why); in fact the mystery starts within days of Holmes landing in the 21st century in The Arrival, and he is still trying to come to terms with everything in At Speed. 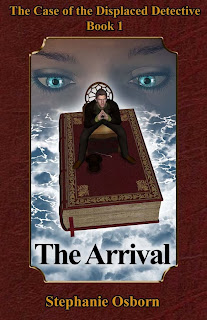 Then I went on to write the next story, The Case of the Cosmological Killer, wherein the historic UFO sightings in the Rendlesham Forest return to the UK, and an eyewitness dies.And the same thing happened! And so books three and four are The Case of the Cosmological Killer: The Rendlesham Incident, and The Case of the Cosmological Killer: Endings and Beginnings. I swear they’re not all going to be two volumes! In fact I just turned in A Case of Spontaneous Combustion, and it’s one volume only! We expect that one to hit store shelves in Spring 2014. I’ve started on book six, Fear in the French Quarter; book seven, A Little Matter of Earthquakes, and book eight, The Adventure of Shining Mountain Lodge, is mostly finished and awaiting the publications of five and six. And I’m planning for adventures beyond that. AND…the first four books have recently been released in The Case of the Displaced Detective Omnibus, the first collected edition my publisher has ever produced ― but not the last!

So in a manner of speaking, I suppose I’m still adventuring with my old pal Sherlock Holmes…only now he’s investigating mysteries that are on MY turf! And I plan to do so until we both retire to the Sussex downs to keep bees!


Few can claim the varied background of Stephanie Osborn, the Interstellar Woman of Mystery. Veteran of more than 20 years in the civilian space program, as well as various military space defense programs, she worked on numerous space shuttle flights and the International Space Station, and counts the training of astronauts on her resumé. Her space experience also includes Spacelab and ISS operations, variable star astrophysics, Martian aeolian geophysics, radiation physics, and nuclear, biological, and
chemical weapons effects.

Stephanie holds graduate and undergraduate degrees in four sciences: astronomy, physics, chemistry and mathematics, and she is “fluent” in several more, including geology and anatomy. In addition she possesses a license of ministry, has been a duly sworn, certified police officer, and is a National Weather Service certified storm spotter.

Her travels have taken her to the top of Pikes Peak, across the world’s highest suspension bridge, down gold mines, in the footsteps of dinosaurs, through groves of giant Sequoias, and even to the volcanoes of the Cascade Range in the Pacific Northwest, where she was present for several phreatic eruptions of Mount St. Helens.

Now retired from space work, Stephanie has trained her sights on writing. She has authored, co-authored, or contributed to more than 20 books, including the celebrated science-fiction mystery, Burnout: The Mystery of Space Shuttle STS-281. She is the co-author of the “Cresperian Saga,” book series, and currently writes the critically acclaimed “Displaced Detective” series, described as “Sherlock Holmes meets The X-Files.” She recently released the paranormal/horror novella El Vengador, based on a true story, as an ebook.

In addition to her writing work, the Interstellar Woman of Mystery now happily “pays it forward,” teaching math and science through numerous media including radio, podcasting and public speaking, as well as working with SIGMA, the science-fiction think tank.

You can learn more about Stephanie Osborn at her website: http://www.stephanie-osborn.com

Fascinating, Jean. Thanks for posting this.