You Cannot Kill The Christmas Spirit 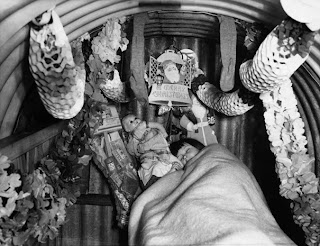 Yankees Catcher Yogi Berra once quipped, “You can observe a lot by just watching.”  While this is true, you can also learn a lot from listening and reading.  By nature, authors are a curious sort who may be more inclined to watch, listen, and learn, but book worms are in a league all their own.  These are the people I am addressing today, for they yearn to glimpse into the other people’s lives to understand history.  Today I am sharing a treasured recollection from a dear friend who grew up in England at a time of world war when civilian casualties were the norm.  It was a time when no one knew if they would make it through the day, and yet somehow they managed to carry on in whatever sense of normalcy they could muster.  I salute all of the survivors of World War II, civilian and military.  This one’s for you.

“. . . It goes back to an air raid shelter.  Sitting in there with my mother and sister, listening to the Luftwaffe paying us a welcome.  Watching the candles flicker.  Later would come the rockets. My sister, four years older, told me Eskimos ate candle wax.  ‘Oh, don't tell him that, Mary - he'll believe you!’  Mom said. And the bombing began. Down the street a house was obliterated.  The family in their Anderson shelter were too close to survive.  At our house, the piano blew from one wall to the other, and, as in tornadoes and their freak affects, the curtains in a microsecond blew out and the windows went back into position, and the curtains were hanging on the outside of the windows.

A little man in an old raincoat came a few days later.  He jotted our damage down in a little black book - who in officialdom in those days, didn't have a little black book?  We factored in our curtains, and chalked it up to the war effort.   ‘During the raid of August 13th, severe damage was done to Stanmore and Edgware, near  to Fighter Command  at Stanmore, Bentley Priory.’  The Jerries were always trying to knock out Fighter Command....twelve miles from our house, which cost our neighbors dearly.  After the war I would ride by Bentley Priory on my bike, and listen to birdsong....

‘How many in reserves?’ Churchill asked during one dicey fight with the Luftwaffe.

Cut to the end of the war in Europe.  Not the flags, although I helped my mother hoist the Union Jack from a bedroom window.  No more local concerns.  Do we remove the chamber pot from  the Anderson shelter?  Are we free to pee, you and me? No more getting up in the blackest night, under strobing searchlights, creeping downstairs, holding hands, heading for the air raid shelter.  Entering through the dank sacking opening, lit by two candles, settling onto our bunks after checking for river rats.  And the sirens, and the bombers - any English family could tell German and English and American engines or worse - the hard uncompromising drone of a V-1 rocket.

Dad was home on leave one night.  He worked twenty hours a day repairing Handley Page Halifax bombers, sometime witnessing the hose washing out a tail gunner's boggy mushy remains, all goggled and gunner wings brevet mocking him.  Faithful gloved hands, or what remained of them, on his .303 quadruple Brownings.  So Dad came home.  One night, in the shelter, a V-1 cut out and spiraled down. Dad threw himself across us, my sister and I.  ‘Daddy!  Daddy! I can't breathe!  I can't breathe!’
His Home Guard winter coat uniform, complete with corporal stripes, weighted us down, suffocating, suffocating ... except the family down the street died.

Know what?  I like Mars Bars.  Candy was rationed, two ounces a week per child.  I gotta Mars Bar.  Later, in l953, we emigrated to Canada.  ‘Hey,’ I said, ‘They got Mars Bars.’  And I tried to figure my Canadian currency, which earlier had been spread on the kitchen table by my dad.  ‘Now, this is a quarter, and this is called a dime...’

This morning I watched an episode of World at War.  VE Day.  I remember it so well, helping my mother hoist the Union Jack at the bedroom window... A glorious sunny day.  People festive in Trafalger Square, about twelve miles away...  Sailors in soldiers' hats -- soldiers in sailor hats...
Dancing, dancing, kissing the girls . . .”

Much has changed since 1945, and the majority of those who experienced world war have passed from this Earth.  Yet the legacy they have left behind shall never be forgotten, so long as their recollections are shared.  Merry Christmas, everyone.  I wish you all a safe and joyous holiday season.
Posted by Mark W. Danielson at 12:00 AM

Merry Christmas and a very Happy New Year, Mark. Thanks for sharing. It helps us realize how much freedom we still have because of the efforts of the brave men and women who died to kept our country safe.

Thanks, Jean. Although most of us don't sleep in bomb shelters now, we still have plenty of servicemembers who do. For them, the holidays are difficult. Please keep them in your thoughts and pray for their safe return. Merry Christmas.