When I wrote my first novels, I spent an inordinate amount of time rewriting first chapters before progressing to the second, only to rewite them again before I finished the book. I finally learned to write them once and forget them until the first draft was complete.

I’ve never been able to outline a novel because I give my characters free rein. They rarely submit to what I've planned because they seem to have minds of their own, and I don’t want them doing anything out of character. In my current mystery/suspense series, my feisty 60-year-old women amateur sleuths surprise me by doing things I hadn't considered before sitting down to write. Logan and Cafferty live with me 24/7 while I’m writing about them, and they have their own ideas about what should happen that day. 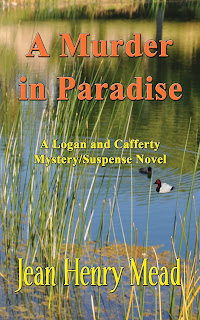 In my new release, A Murder in Paradise  fifth in the series, my protagonists decide to vacation in a Texas RV resort with millionaires and other affluent travelers. Until the third quarter of the book, even I didn’t know who the killer was, and I had to return to earlier chapters to add clues  and flesh out some of the characters.

In the second novel,  Diary of Murder,  my sleuths leave California, buy a motorhome, and are trapped in a Rocky Mountain blizzard. That had actually happened to me, so I could write convincingly about the life and death experience. The blizzard starts the novel off with suspense, but the characters face similar circumstances later in the plot, so I had to swap details between chapters so that it didn't appear the book was mired in snow.
If I were not a writer, I'd probably be a meteorologist. I'm fascinated with weather patterns and weather plays a role in most of my books. Weather can also serve as an alternative villain in a woman against the elements plot.

In A Village Shattered, the opaque San Joaquin Valley fog hides a serial killer, but I didn’t even think about tule fog until I was writing chapter three. Having lived in the valley for a dozen years, I know the horror of regularly driving in dense ground hugging clouds, so I switched seasons and returned to chapter one to add fog to the plot. In doing so, it tied all aspects of the story together.


A problem most authors eventually face is writer's block. Fortunately, I began my writing career as a news reporter and there's no such malady in the news room. Fiction, however, is a different story. There are no facts to guide a writer unless s/he has done a tremendous amount of research. I solved the problem by rereading the previous chapter(s). The momentum then carries me into the current one.

How about you? How have you solve a writing problem?

Labels: A Murder in Paradise, A Village Shatteed, Diary of Murder, Murderous Musings blog, Writing lessons I have learned by Jean Henry Mead

I love the way you write! I have little luck trying to create an outline before I begin writing. I usually do it, then after the book is finished, I look at the outline and am astonished by what I see. Most of it never got into the book.

Thank you, Jackie. I enjoy your work as well. I envy writers who can follow an outline. I once wrote myself into a corner and had to delete nearly 20,000 words and rewrite.