“What we have here is a failure to communicate!” 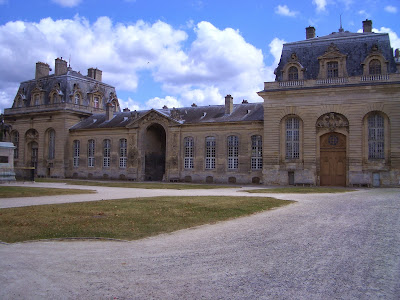 I just returned from another successful Men of Mystery event in Irvine, California.  In my twelfth consecutive year and with Alexander “Sandy” McCall Smith and Scott Turow as primary speakers, the event sold out fifteen percent beyond its planned capacity.  As always, our guest speakers and wonderful hosts made it another memorable event.

During my time there, I swapped tales with fellow authors and recalled memorable scenes and characters from my stories with mystery lovers.  When several people at my table began discussing trains in Europe, my mind flashed back to train ride from Paris to Domaine De Chantilly.

My co-pilot spoke French so I gave him the lead to get us there.  Looking on, I was impressed with his communicative skills as he purchased tickets for the two of us.  We easily navigated our way through the train station and enjoyed the view as the train headed north.  Predictably, the commuter train stopped several times along the way while my cohort and I talked and enjoyed the beauty.  Most stops had been short, but one seemed curiously long.  The scene became even more peculiar as we found ourselves alone with one sleeping passenger.  Being optimists, we stayed and continued to chat in spite of the oddity. 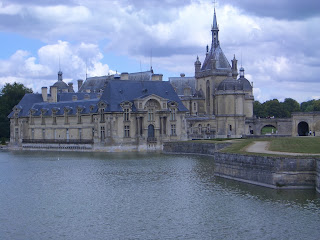 Perhaps fifteen minutes later, people began to embark again.  Five minutes later, we were underway – heading south!  Needless to say, we got off at the first stop, bought new tickets and boarded the next train going north.  Upon arriving in Chantilly, we were lectured by the ticket agent because we had not purchased the correct tickets.  (I didn’t need to speak French to understand her anger.)  Lumbering into town, stinging from the train adventure, our excitement returned as we came upon a magnificent structure we soon learned was the horse barn in the above photo.  Beyond that was the castle, complete with moat.  Smiling again, touring the ground proved well worth the frustration.  Sadly, our misadventures were not over.

Having purchased the correct tickets this time, I looked forward to an easy return trip.  All was well until my astute first officer failed to notice our stop until the train pulled away from the station.  Less than amused at repeating our northbound flub, we disembarked at the next stop, bought new train tickets and headed back to Paris.  Once we left the train station, I told my FO I was resuming the lead and led him back to the hotel.  We joked about the experience on our return pond crossing.

The moral of this story is you may be able to speak a language, but that doesn’t mean you can communicate.  As writers, it is our mission to ensure we convey clear thoughts in an entertaining manner.  Sounds easy, right?  If it was, everyone would be a published author.  Choose your words carefully and keep writing.
Posted by Mark W. Danielson at 12:00 AM

I'm sure others reading this will have had the same thought as myself, i.e. to hope that his navigation skills in the cockpit were more sharply honed. But, as an ex-French lecturer who's lived in France and used to speak French quite fluently, I sympathise with him. I love the French but some of them think an ability to speak the language amounts to a deliberate insult. I also have meetings scheduled with editors in Paris in January with a view to some of my books being translated into French but my French is now so rusty that I'm not looking forward to it. But at least it's in Paris, which is always a joy to visit.

'Ability' should, of course, have read 'inability'. D'oh!

French is difficult enough, but I cannot imagine trying to speak Cantonese. Then again, English is one of the world's most difficult languages. I constantly prove I have yet to master it. :)

Quite an adventure, Mark. The architecture is beautiful so I'm sure you enjoyed the trip. I've been attempting to learn the French language since high school when my class was discontinued due to a lack of students. It's a lovely language but much more difficult than Spanish.

Jean, I always feel ignorant visiting foreign countries, but by smiling and nodding and never expecting anyone to speak English, it is always a pleasant experience. French is a beautiful language, but not spoken in many countries. If I had a pea brain, I'd have learned Spanish many years ago. :)

Mark, I was fortunate to have learned Spanish in grammar and high school in Los Angeles, seven semesters by the time I left college, but haven't had anyone to converse with, so I've forgotten most of it. However, stores like Home Depot have English/Spanish signs that I can still translate. (I would love to visit Spain.)