I just finished a little e-book by James Lofquist. It's called Tell, Don't Show, and it may be going to the top of my "Most Useful Books on Writing" list. It took me less than an hour to read, but it just may have changed my life. 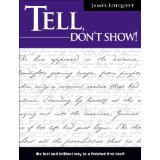 You see, I'd fallen into a trap. I was trying to write and edit at the same time. I knew better--I've read Bird by Bird, for Pete's sake!--but the fear that I'd forgotten how to write and all I'd ever produce would be drivel got the better of me. I was struggling to bring the scenes to life before I even had scenes.

Lofquist isn't saying, "Don't write vividly," or  "Just write crap and publish it," and he's not saying "Tell, don't show" is a rule you should follow in your final draft. He's saying, just put the story down. Don't worry about being fancy. Don't worry about if it's good. Don't try to get concrete and specific; just write it as it comes. Then you have the structure of the story, and you can go back in and flesh it out, make it flow, give it depth, make scenes out of it, and bring it to life. I've heard this before, but Lofquist explains the process in a straightforward, accessible way that was apparently just what I needed to hear. The minute I finished his book, I opened my manuscript and wrote 2000 words, maybe the easiest 2000 words I've ever written.

I can't guarantee this book is a cure for all your writing ills, but if you're scribbling along and suddenly find yourself a little bit (or a lot) stuck, you might want to check out this inexpensive little book. I'm glad I did.

I totally agree with you, Lofquist book is a brilliant tool.