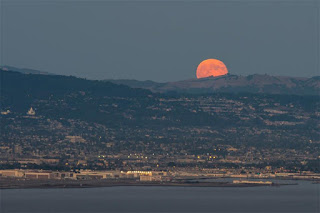 In layman’s terms, the Harvest Moon is the full moon that is closest to the fall equinox.  I have many memories of them.  As a kid, I once pedaled my bike over a hill at sunset and unexpectedly came face-to-face with a huge yellow one that was at least a gazillion miles wide.  Petrified, I raced home and hid under my bed until my heart slowed.  Many moons later at age seventeen, my fifteen year old buddy and I were camping under the wing of my rented airplane at a small airport near Mount Shasta.  Since we had the only airplane on the airfield and it was quite dark, Dan and I swapped lies while star gazing and munching on the Kentucky Fried Chicken Momma June got for us earlier that day.  Suddenly all was quiet as a red glow appeared over the Sierra Nevada, silhouetting the mountains.  As the glow intensified, we anxiously spoke about fire season and how quickly fires spread this time of year.  Just as we were about to slide out of our sleeping bags and notify the authorities, the top of the full moon peeked over the ridge.  Relieved, we laughed and swapped more stories as the moon made its Heavenly ascent.

Like the sun, the moon also has a dark side.  On October 29, 2012, the full moon’s high tide, a cold front, and Hurricane Sandy created a perfect storm that bulldozed New York City and the New Jersey coast.  Soon after Sandy made landfall, the Manhattan skyline went dark, making technology on every level worthless.  Granted, this storm’s path was a fluke, but it should always remind us that our frail existence is far too dependent upon energy and outside help.

On September 29th, the east and west coasts both enjoyed the beginning of a Harvest Moon.  This particular moon will forever hold special meaning to my family.  On this night my father and mother admired it from the deck of their Napa, California, apartment.  For two hours they held hands, sharing memories of their sixty-four wonderful years together.  The next morning, the actual date of the 2012 Harvest Moon, Dad was gone.  He passed in seconds and never suffered.  We are all grateful for that.

Four weeks later, we celebrated my father’s life under another near full moon.  As fate would have it, this was the same moon that wreaked havoc on the east coast, yet in Napa, it shined as a beautiful reminder of my father’s life and his last evening with his bride.

Heaven does not recognize east or west, political boundaries, war, devastation, bloodshed, or sorrow.  It is a peaceful place where Dad now lives.  I feel his presence every day, and in time I hope to join him.  Until then, Dad, God bless you, and thanks for everything.  I miss you dearly.
Posted by Mark W. Danielson at 12:00 AM