The death and destruction -- and yes, drug flow -- continue along our Southwest border because the Obama Administration refuses to secure our border, focusing its intentions instead on blocking enforcement of our immigration laws and finding ways to implement policies of back-door amnesty, ignoring the cost in terms of lives and dollars.

While this report suggests I'm commenting on activities during the month of August, the truth is many of the events described below occurred just in the last week. 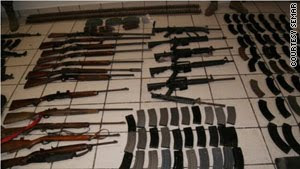 You probably read in the papers about the mass grave site discovered just outside Ciudad Juarez. Seventy-two bodies, men women and children, slaughtered by Mexican drug lords engaged in human and drug smuggling. Weapons from the ranch where the bodies were found are shown above. No one knows how many women and children escaped the machine guns only to be sold into sexual slavery, torture and snuff films for deviant pleasures. It's believed most of these poor people couldn't come up with the added cash demands their coyote transporters extorted from them. Or maybe they failed to pass whatever acceptability standards their smugglers required.  Border Massacre    Dead Folks Pile

How many other mass grave sites are there? Nobody knows. Car bombs and Dead Cop

But you can bet more mass grave sites will be found. And the cop who was investigating the murders was himself murdered, along with several investigative journalists who nosed into the matter. But the gangs weren't done yet: The mayor of a nearby city was also murdered. And Sunday...another one. 2nd Mexican Mayor Slain

I won't recount the tons of drugs seized this week. I can't keep up with the daily total in Arizona alone. But Border Patrol Agents suggest it's less than ten percent of what's getting through. Nor can I advise the number of those who died from the elements in our southwestern deserts. Temperatures have been in the hundreds all month, and heavy rains south of Tucson this week have caused flash flooding on a wide scale. Walls of water rushing down narrow washes -- the path of choice for illegals -- at speeds approaching thirty miles per hour. We may never have accurate statistics on these dead. Those who aren't eaten by animals or buried may lie underneath the hard-pack clay, a component of concrete.

So, it's fair to ask yet again what our federal government is doing to secure our still porous border. Yes, they've sent a few hundred National Guard troops as sentries, about one per mile, but those troops have been instructed not to enforce our federal immigration laws but to just tell somebody if they see something.

Whom do they tell? ICE, the agency charged with border law enforcement? The Feds instructed ICE not to take illegal border crossers captured by Arizona state authorities, and Janet Napolitano announced a new policy this week: They're dropping deportation measures against those who haven't been convicted of a crime. Back-door amnesty so to speak. So ICE has a morale problem. Their agents this week gave the elected officials -- Janet Napolitano -- governing them a vote of No Confidence. Which raises an interesting question: Why did Napolitano, who was so ardent in demanding the Feds secure our border when she was Arizona's governor, back off from that position after she joined the Obama Administration?

Do you think someone whispered in her ear?

Obama has yet to travel to the border region. Seems he has more pressing matters. Tee times, you know. Doesn't he know Arizona has golf courses?

And what about Eric Holder, our esteemed attorney general? Sorry. He's too busy figuring out what to do with Gitmo detainees and where to try or jail 9/11 planners, not to mention filing lawsuits to block Arizona from enforcing federal immigration laws and filing civil rights lawsuits against Sheriff Joe. Indeed, Holder's Justice Department just filed a massive document demand against Sheriff Joe's office, asking for everything but Joe's secret barbeque recipe. Okay, the recipe may have been requested, too. Hard to tell: small print, many sub-parts,.too many pages to digest.  It might take most state agencies years to satisfy such a demand. Holder wants everything yesterday.

Yes, the federal government has more money than Arizona. An unlimited budget. And Holder is using that bottomless pit to his purposes. Most folks would call such tactics "harassment." Holder calls it "policy." Holder Harassment

Don't Eric Holder and Janet Napolitano have the same boss?

If you can believe it, there are unguarded pedestrian bridges across the Mexican/American border. Don't the Feds know these bridges exist?  Unguarded Pedestrian Bridges.
Here's one of them. 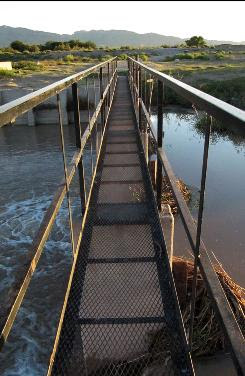 Border agents requested Department of Interior permission to cross onto federal border lands in Arizona to look for illegals and illegal smuggling activities. These federal lands lie in the area that's known as Smuggler's Alley, south and west of Tucson.

To whom does the Department of Interior report...?

Do you see a pattern here? Doesn't all this anti-enforcement seem a bit...well... orchestrated? Go ahead: Connect the dots.

Politics. Getting elected or re-elected. That's what counts.

What about the bucks, assuming one doesn't care about the human toll? The cost of crime, free health care, Holder's lawsuits and tax revenues lost. Smuggling and the fruits of it are a cash-only trade. No witholding tax, no income tax. And illegal immigrants often operate on a cash basis, too. So not only do we lose tax revenues from many of them; we add to our tax burdens by providing illegals free health care. Have you been to an Arizona Emergency Room lately? Good luck getting in. Doctors in Tucson advise citizens not to even think about doing so.

Considering all this prompts one to ask: Have we lost our understanding of what citizenship means?
Posted by Unknown at 7:55 PM

Thanks for keeping the rest of us informed, Ben. I hope you're considering compiling your reports into bookform.

I've considered it, Jean. Time will tell. This may go on for a while. Then again, we may see a radical amnesty program during the coming Lame Duck Congressional Session. Stacking the deck so to speak for the 2012 elections, not to mention re-districting.

Ben, your posts are a much-needed dose of truth in a world where our government "representatives" and many in the media bashed the Arizona law without even having read it.

If things continue as they are, we'll all be in Arizona's shoes soon enough. Even here in the Southeast, the influx (and inlfuence) of South and Central American gangs and drug lords is becoming a problem.

It's even happening here in Wyoming, which ranks fifth in the nation in methanphetamine production. And we're getting more and more illegals, who are easy to spot. No profiling necessary.