Just when one thinks the drug wars in Mexico can't get any more bizarre or threatening, circumstances prove otherwise.

Seems the military just shot and killed Ignacio Coronel, #3 Capo of the Sinalua gang, and his left-hand lieutenant, amid Juarez Gang public allegations that President Filipe Caldercon's government favored the Sinalua gang in the fight for Mexico's future, claims which Calderon, of course, angrily denied.

Coronel -- ironic name, huh? -- controlled the Pacific trade, you know, keeping Californians meth-and-coke happy. (I'd list grass, but medical marijuana is spreading in California like its wildfires, and the Golden State's product is the world's gold standard. Ganja may be a two-way street in the California-Mexico drug-smuggling trade.)

So... was Coronel hit in response to the Juarez Gang complaint? Or was it a legit military operation? Or maybe Coronel wasn't ruthless enough in growing a part of the business and his boss thought he'd gain two benefits from a rub-out: move up a young turk and ease pressure on Calderon. Or maybe Coronel screwed up -- like running a hit-man squad out of a Durango prison.

Who knows? But Coronel's Sinalua drug operation was based in Durango, which abuts our border between Yuma and Mexicali.

And that's where the prison's located, [HERE} where twenty-three gang member-inmates died in a January brawl; the prison just sourced for the birthday party massacre you heard about two weeks ago. One hundred twenty rounds fired, twenty-three guests dead. Shots fired wildly into the crowd.

Purpose: to instill pure terror on anyone dealing with the other gang and to scare the bejesus of anyone who would talk or oppose. 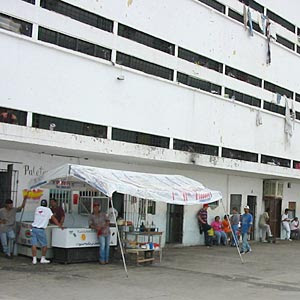 The prison's director and top three lieutenants got busted. Charges: Running the prison as an execution squad on hire for the gangs. Seems prisoners used the prison's phones and internet connections to run their businesses, and sent out execution squads for enforcement or rent-a-hit missions, using prison weapons, vehicles and inmates -- some of them juveniles, You know, expendable... Then, job done, the killers returned to prison.

Need I say an operation like this requires support, that there are plenty of folks in the know... and on the take? These gangs are thirty-to-forty years old. The money stream's got a web of tributaries.

And now this on the wires: Citizens of the city housing the prison staged a protest a couple days ago. Folks don't want these people arrested. The protest grew so large even the spooked-out media -- frequent targets of Mexican gang violence -- gathered. One of the gangs -- not sure which one yet -- kidnapped four journalists, including the cameraman and talking-head for Mexico's largest television station. Now that gang is forcing these journalists to blast via videotape the other gang.

This might all be fun if it were fiction.

But this scenario gets worse. The Mexican drug war and its products are leaking through our southwest border like an Arizona wash after a heavy rain.

Money from Mexican drug smuggling is so big, such a significant factor in the Mexican economy, bringing with it corruption on such a massive scale, the government itself is at risk. Today, the American Consulate in Juarez shut down until further notice. Full scale security review. Remember, one of the recent Juarez assassinations targeted a woman responsible for U.S, Visa approvals...

You and I know the Juarez American Consulate Building possesses secrets. Homeland Security, Border Patrol, FBI, ICE, DEA; they've all been there. All forms of data flow. The gangs have money and influence. Extortion, blackmail, bribery, trafficking, murder -- tools of the trade. But these guys go further. Terrorism. Beheadings, grenades, an IED attack just last week.

In such an environment, whom do you trust? Secrets slicked green.

Meanwhile, our border is still unprotected, and the Mexican smuggling trade -- drug and human -- is an Arizona growth industry. 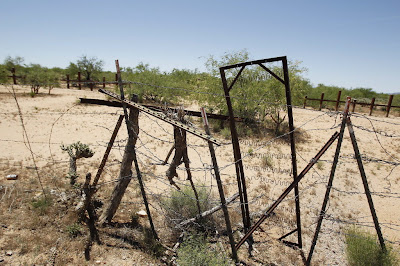 It's certainly an amazing tale - heard some on the radio this morning too. Who could write it. I'd heard the border was way less porous these days though, though the gun-running from US to Mexico's supposedly going well.

We think such violence is far away in Afghanistan or Iraq, but it is here within walking distance of our borders. And it's bleeding into the US. Scary.

I heard Sheriff Joe on the radio this morning. It seems the $5 million reward for his assasination by the Mexican Drug Cartel has been lowered to $1 million. He was laughing about it and I wonder how well he's protected.

Sheila, that's just not true. I think you're referring to the Obamaa Administration's statement of some months ago that 90% of the serial numbers submitted to the U.S. were U.S. sold guns. What's transparent in that statement is that very few tracking requests have been received from Mexico. Plus, not many fully automatic weapons are sold in the U.S. The Mexican gangs prefer automatic weapons and grenades. Those don't come from the U.S. It is very rare that the Border Patrol catches someone smuggling guns across the border. What is smuggled most is drugs and money, from Mexican gangs operating in the U.S. Just two days ago, a ton of marijuana was found in an eighteen wheeler. This is a common occurrence in Phoenix and areas south.

Most of the guns smuggled into Mexico come from countries south of Mexico. They come up from the south or onto Mexico's coast.