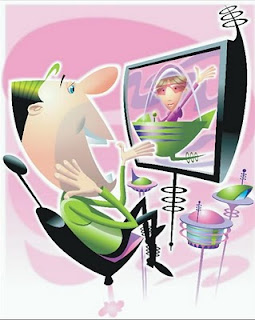 I read an article in the newspaper this morning about the video-chat revolution. Using programs like iChat, Skype, ooVoo, and Chatroulette, more and more people (especially teens) are talking face-to-face on-screen instead of holding a phone to their ear and staring at the ceiling.

In a survey last fall, 45 percent of respondents said that in five to ten years, they expect to use live Internet video frequently to communicate with family, friends, or colleagues. Right now it's mostly computers with webcams, but the big screen is coming. Panasonic, Samsung, and LG began selling TVs equipped with Skype this year. A webcam and mike are extra, but soon they'll be built-in.

Think of the possibilities for mystery writers. Detectives can talk to each other and view evidence in places far removed. With the TV on and a DVD in the recorder, you might even pick up a murder live. Not every detail, of course. We'd have to hide most of the bad guy's identity. Just enough to provide the telling clue.

From what I read, Chatroulette is a controversial site created by Andrey Ternovskiy, a seventeen-year-old Moscow student. When you sign on, it randomly pairs you with someone unknown from anywhere around the world. It began with twenty users, and in a matter of months mushroomed to 30 million unique visitors. The news story said it sometimes produces X-rated results.

I can see it now: a guy logs onto Chatroulette and up pops someone from across the globe. The face on the screen stares at him, lifts a .45 Glock and says, "Bang! You're dead." Two days later the guy turns up a corpse. Ah, the intrigue.

The article writer, a reporter for USA Today, compares the trend among teenagers to what us oldies remember from the sixties with Judy Jetson, the animated space-traveling kid in The Jetsons TV series. But, as she points out, it no longer requires bulky hardware and a corkscrew antenna. You can read the full article here.

I can see other uses for the video chat. How about talking to your editor and holding up manuscript pages for her or him to check? "Why don't you take out that word there," she says, pointing, "and change it to..."

It would be a great research tool to interview someone miles away as though you were sitting in the office with them. If it were me, I might want to clean  up my desk a bit before exposing my rat's nest to strangers. That's just one of the hazards of modern technology. Just think of all the advantages. In fact, why not put your thoughts in a comment?

I'm waiting.
Posted by Chester Campbell at 11:27 AM

I think the Powers That Be are getting us (the people) ready for a life in some Bio-Dome where we never leave our chambers and only communicate via a keyboard and screen.

But I'm a little paranoid...

Nik, I wrote a short story about that workd once. It wasn't very good, but maybe I will pull it out again and rework it one of these days.

I have a video camera installed on my computer but only know one other writer who also has one. I would probably scare the willies out of anyone who tried to contact me first thing in the morning while I'm still in my pajamas. :)

Chester, your reference to Chatroulette reminds me of Jeffrey Deaver's recent book, Roadside Crosses, about teens who flame each other online. Pretty scarey stuff when one of them starts actually murdering the others.

It becomes more and more of a challenge to get the detective out of the office, off the phone and computer, and into the thick of the action.

So many plot lines are foiled by the simple question, "Dude. Why didn't he just use his cell phone?"