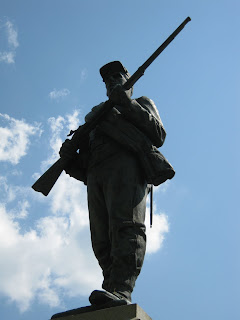 Still curious about the Civil War and having extra time in Memphis, I decided to visit the Civil War Interpretive Center in nearby Corinth, MS. This National Parks facility, which opened in 2004, does a great job of teaching why Corinth was so vital during the War. As a major railroad crossroads, it moved Confederate supplies as well as some 300,000 soldiers, making it a prime Union Army target. 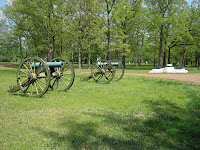 In March, 1962, Maj Gen Ulysses S. Grant disembarked his Army of the Tennessee (named for the river, not the state), at Pittsburg 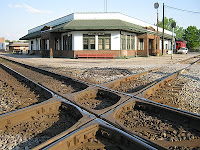 Landing on the Tennessee River. Under strict orders not to engage the enemy until reinforced by Maj Gen Don Carlos Buell’s Army of the Ohio, he established base camp on the river’s bluff and posted forward camps around a log church called Shiloh Meeting House. Aware of these orders, Supreme Confederate Commander in the West, General Albert Sydney Johnston, planned to smash Grant’s army prior to Buell’s arrival. On the morning of April 6, Johnston led his Army of the Mississippi, 44,000 strong, to the Union camps at Shiloh Church. Detected by a forward Union patrol, (AKA “picket”), Grant’s army of 40,000 hastily assembled to meet their attackers. The resulting battles lasted throughout the day with the advantage going to the Rebels. Overnight, two miracles favored the Union: Union Gen Buell’s army arrived and Confederate Gen Johnston bled to death from a stray bullet. In the morning, Johnston’s replacement, Gen P.G.T. Beauregard, mounted an offensive to finish off the Union Army, unaware that the Union Army was now 54,500 men strong compared to his 34,000. By the end of the day, Beauregard had withdrawn his troops to Corinth. The Union did not pursue.

In the aftermath of the two day battle, over 7,000 men lay dead and another 18,000 were wounded or missing. This stunned America, as it was more casualties than she had suffered as a united nation during all her previous wars. After being reinforced by a third army, the Union pressed its attack on Corinth, capturing the city on May 30th. On October 3rd and 4th, the Confederate Army launched an unsuccessful counter-attack on Corinth. When the smoke cleared, an additional 7,000 Union and Confederate soldiers lay dead. 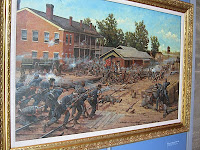 In a nutshell, that’s the history behind both battles. Although today’s Corinth has considerable markers commemorating sites, all that is left of the original town is railroad tracks because whatever the retreating Confederates didn’t burn, the Union torched when they moved on. I found the Civil War Interpretive Center well worth the visit, but the town itself has no historical re-creations. On the other hand, you can easily spend all day taking in the stories at Shiloh Battlefield.

From Corinth, Shiloh Road follows the trail of the advancing Confederate army. With my anticipation building, I entered the park near Shiloh Church, and was stunned by the vast number of numerous markers, monuments, and cannons. Under a blue sky and a nearly deserted park, I reveled in walking the grounds, reading markers, visualizing battles, and stopping countless times in awe of the once blood-splattered woods and meadows. The Hornet’s Nest is a dense forest so named for its buzzing bullets. Newly planted trees now grow in The Orchard where some of the heaviest battles occurred. 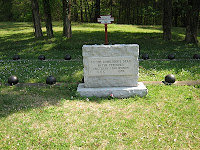 While admiring a Confederate mass grave, I heard heavy footsteps in the nearby woods. Staring into the forest, I imagined how impossible it would be for soldiers to silently make their approach 148 years ago. Then the Tom turkey revealed himself; a huge bird of at least forty pounds. Soon, his hen came running to him like Bo Derrick in the movie “10”, but with less grace. In other locations, squirrels were the ones trampling the fallen leaves. I saw no ghosts, but did feel the presence of many fallen soldiers. Most were kids when they died fighting their brothers. Shiloh Battlefield gives a real sense of proximity in which these battles were fought. Initial lines were separated by a few hundred yards. Then the cannon fire preceded the charge. Stepping over their fallen comrades, the soldiers merge. When too close for bullets, bayonets and swords pierce and slash. My visit here was solemn and humbling. Dreams of these battles have disturbed my slumber ever since.

Our brief history as the United States of America is scarred by many battles, but none approach the magnitude or significance of our Civil War. More than anything, this war began over a division in economic structure. We must never forget this dark side of US history. 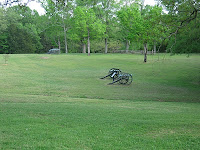 Our nation is currently divided over politics, much as it was in 1862. When emotions run high, violence breaks out. Recently, a Louisiana couple was severely beaten, followed by several political slurs. As our economic woes continue, there is strong potential for more violence. As a nation, we cannot repeat our past mistakes. Every political leader agrees with this principle, and it is also the reason our National Parks maintain sights like Shiloh Battlefield and the Civil War Interpretive Center.
Posted by Mark W. Danielson at 12:01 AM

Great article, Mark! You're so right about the dangers of political unrest. The Civil War is a ghastly reminder of what can happen here again.

We seem to have lost track of stability and civility. Let's hope our future has a brighter outlook.

It always amazes me how people think they can use physical force to change someone's mind about a political stand. Superior force may change their immediate reaction, but only the clear expression of a superior idea has a chance of changing minds. Far too often, emotions rather than intellect rule the day.