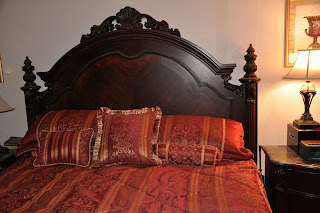 Is your bedroom furniture making you sick?

I was surparised to learn that forty-six billion pounds of formaldehyde are produced annually and used in the manufacture of furniture, kitchen and bathroom cabinets, plywood, wall paneling, cosmetics, adhesives and other household products.

Formaldehyde is not only toxic and allergenic but carcinogenic. The resins are used mainly in construction materials and are the source of one of the most common indoor air pollutants. At concentrations above 0.1 ppm, formaldehyde can irritate the eyes and mucous membranes. When inhaled at this concentration, it also causes headaches, burning throats, difficulty breathing and asthma symptoms. I know because I’ve suffered them all. We recently got rid of our cherry wood bedroom set, which was manufactured in China where most furniture sold in this country now originates. Pity the poor workers who assemble furniture on a regular basis. Even one of the factory secretaries said that she has to have her eyes checked every three weeks for toxicity.

The problem now is finding a replacement bedroom suite. For $8,000 or more, a furniture manufacturer will build a bedroom suite that contains specially ordered glue and wood that is purportedly formaldehyde-free. However, I was told by a Montana manufacturer that no formaldehyde-free plywood exists. I did some research and found that a company called Eco-Wise in Austin, Texas, produces such a plywood, so I called the furniture company to tell them about it.

I was then told, “That’s just the new California standards that take effect next year. The plywood is not entirely formaldehyde-free. And it’s going to be terribly expensive.” How expensive can enough plywood for the dresser drawers cost at $77.95 to $89.95 for a 4 x 8 sheet? I called Eco-Wise and was told to call back later when the supervisor was in. In the meantime I could research “MDS plywood” online. That was a dead end because everyone I called, and was referred to, had no idea whether formaldehyde exists in their product, but they referred me to suppliers "who might know."

Salesmen, managers and supervisors didn’t know. So I decided to call Eco-Wise again. While waiting for a call-back, I did further research on formaldehyde. The Columbia Encyclopedia says that “Formaldehyde, or HCHO, at standard temperatures and conditions is a flammable, poisonous, colorless gas with a suffocating odor. It’s used in the preparation of dyes, in the production of Bakelike, other plastics and synthetic resins, and for several other purposes. The IUPAC name for formaldehyde is methanal.“

The Wikipedia warns that methanal “is a toxic chemical. Drinking even small amounts can cause blindness.” At room temperature it’s a polar liquid used as antifreeze, solvent, fuel, and denaturant for ethanol.”

No wonder I’ve had blurred vision when getting up during the night. Isn’t it comforting to know that most of us have been sleeping with all these toxic chemicals? I’ve come to the conclusion that the best way to replace our furnitute to cut down a tree and build our own.

One good piece of information came from one of my phone calls. The Eco-Wise supervisor told me that those who can't afford a nearly formalgahyde-free bedroom suite can spray or paint their furniture with a product called Safe Seal. The coating seals in toxic fumes at a rate of 90% effective. That's great but something needs to be done at the federal level because manufacturers are either oblivious to the health problems their products are causing, or they simply don't care. Especially sensitive to the toxic fumes are small children and the elderly.

California has taken a step in the right direction with a limited ban on formaldehyde products, scheduled to take effect next year, but much more needs to be done.
Posted by Jean Henry Mead at 12:01 AM

Jean, you are a wonder. I had no idea about any of this. Pretty spooky stuff. Thanks for the article. I learned something new today, something I never would have thought of. You seem to be everywhere at once, and you're moving, too. I do not know how you do it.

Scary stuff, Jean - but the actual post is a tribute to your thoroughness as a blogger. I can only echo what Ben said - I don't know how you do it. You put the rest of us to shame.

I might have something you all would be interested in. I'm with a company that makes readily-available hardwood plywood panels with no added urea formaldehyde. We use a soy-based technology to glue the wood together, called "PureBond." We have recruited a network of quality-oriented fabricators who know how to make "green" furniture and cabinets - you can find a directory of them at our website at www.cfpwood.com. We're trying to take the "mystery" out of sourcing well-made and formaldehyde-free finished products!

Thank you all for the kind words. My journalism background helps with research, and when your health is at stake, you stick to the subject like a bulldog to a burglar.

Thank you, Todd, for the PureBond information. I'll pass it on to the Montana furniture manufacturer although they're not too happy with me telling them where to acquire their supplies. Will PureBond sell us just enough materials to build our own bedroom set?

One summer while in college I was working as a mobile home handyman. Trailer homes made in the 50s were framed in real wood, but that stopped early on with artificial products. One benefit of these mobile homes/campers is they tended to leak air, thus the poisons from artificial woods weren't terrbily harmful, but as homes have become more efficient, these poisons tend to remain trapped inside. Since artificial products are now being used in every type of home, it is wise to circulate fresh air into the house whenever possible. Since I don't envision quality returning back to the way it once was, we must be the vigilant ones.

When did all this nonsense start, Jean? I think my bedroom furniture dates back to the sixties or seventies.

If you're not suffering from headaches, breathing problems and blurred vision, I wouldn't worry about formaldehyde fumes. I haven't had time to fully research the subject, but I do know that NAFTA not only brought us economic disaster, it opened us up to all kinds of problems with Chinese products. Their furniture is loaded with formaldehyde and nearly all furniture sold in this country now comes from China.

As Mark said, it's a good idea to air out your house, especially your bedroom, every day to get rid of any toxic fumes.

Jean, when you decide to find out something, you go all out! And thank you for doing so.

I'm somewhar confused by your post. NAFTA refers to Canada and Mexico, not China.

My complaint with NAFTA is food. I absolutely refuse to buy produce from Mexico, and I quit buying tomatoes from Canada on general principles.

Furniture: I just bought a recliner. It's cheap but it was made in Mississippi. In the days when I could afford to buy good furniture, I bought brands that came from North Carolina.

Airing out the house: I wish! This Oklahoma air is worse outside than inside!

Pat, You're right about NAFTA, but I still associate it as opening the international doors to cheap, unhealthy products. We avoid Mexican products too and Canadian baked goods contain ingredients from China that literally make me sick.

Beth and Helen, thank you for the kind words.

Chester, I forgot to mention that formaldehyde has also been linked to serious cases of depression.

And then there are all those FEMA trailers saturated with formaldehyde that caused illnesses in Katrina survivers.

I keep forgetting that Montana is on the Canadian border, so of course they would send baked goods.

I'm close to Texas and Arkansas. I get eggs from Arkansas and am quite attached to their logo "Heidi The Hen" -- lol.

I get canned Osage "raggedy" peaches from Georgia.

Today I bought strawberries from Watsonville, Calif. The local stores are selling more and more produce from California. I buy it just to assuage my "homesickness" for the San Joaquin Valley.

I buy Vidalia onions in season, but really miss those big sweet reds from California.

Except for Sara Lee's whole wheat bread, I do my own baking. I keep homemade biscuits and cornbread in my fridge-freezer.

I guess my furniture must be in good shape, Jean. I'm about as un-depressed a person as you can find.

Good for you, Pat. I also miss the San Joaquin Valley and all the fresh produce and walnuts. We recently bought ten years' worth of organic seeds and a greenhouse. We're not taking any chances on GMO foods.

I'm glad to hear that you're in the clear, Chester. By the way, I'm feeling much better since we trashed our bedroom suite. I just got a call from the Montana furniture factory. They now want $1,000 more to make us formaldehyde-free furniture. They just lost a sale.

"Of course, everyone chooses, as a natural priority, to enjoy
peace, joy, and love by helping to find, quickly share, and positively
act upon evidence about healthy and safe food, drink, and
environment."

http://groups.yahoo.com/group/aspartameNM/messages
group with 140 members, 1,572 posts in a public archive

Methanol in small amounts is present along with ethanol in beverage
alcohol.
[Murray: and about the same amounts from aspartame diet sodas]

Use of high levels of Folic Acid was found to inhibit brain damage
caused by the methanol.

The use of Folic Acid during pregnancy has been recommended
for several years to prevent neural tube defects.

However, this study indicates that even higher levels of Folic Acid
can be very beneficial to the developing baby, particularly where
alcohol exposure is a factor.

Folic Acid is mandated as an additive to all flour sold in Canada.

The debate has begun on its required addition to all beverage
alcohol to help mitigate damage caused to both infants and adults.

Great article, of course, the High End Bedroom Furniture you offer is great, but looking over the Internet I found this, which I think is best, www.spacify.com

Buy and sell new and used modern, outdoor, office, bedroom and home furniture.
Choose from a great selection of gently used furniture for every room in your home.
More here used furniture