That Private Eye Could Dance 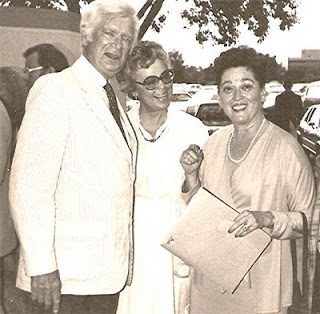 Our regular Friday blogger, Jean Henry Mead, has been called away on a family emergency. During her absence, her spot will be filled by guests or one of the regulars contributing an extra essay for the week. Today Pat Browning gives us an interesting look at a senior TV private eye, the late Buddy Ebson. The photo shows Buddy and his wife with Pat some twenty years ago.

But before those long-running TV shows, he made a string of movies, and before that he was a Broadway star. Until he put on a coonskin hat for “Davy Crockett” he was first and foremost a song-and-dance man.

In “Barnaby Jones” (1973-80) Ebsen played a private eye who came out of retirement to solve his son’s murder. A YouTube video has Ebsen explaining how he went from Jed Clampett to Barnaby Jones. He supposes that network executives sat down in a back room to think of a private eye they didn’t already have.

Ebsen supposes that network executives huddled in a back room and said, “What haven’t we got? A mature private eye … somebody over 39.” Ebsen draws out the word “mature” in his trademark folksy manner, and gets a big laugh from his audience. For all we’ll ever know, that explanation is as good as any.

Ebsen was 65 when “Barnaby Jones” began, 72 when it ended. He never retired. Check him out at imdb.com. He apparently guest-starred in every TV show on the tube. He took up painting and wrote a book or two. By the time he died at age 95 you might say had tried everything once and some things twice.

Anyone curious about the ins and outs of 20th century show business should read Ebsen’s memoir, THE OTHER SIDE OF OZ. The photos alone are worth the price of the book.

There are a couple of good YouTube videos of Ebsen at his youthful best. He was 6’3” tall. In a clip from “Broadway Melody of 1936” he’s dancing with Judy Garland, whose head was about level with a point above Ebsen’s elbow. In a clip from “Captain January” (also 1936) he’s dancing with Shirley Temple, whose curly top is about even with Ebsen’s belt buckle. Didn’t matter. His moves were so smooth that he made the routines look easy.

I met Ebsen in 1985. He was promoting a Shakespearean festival. I was freelancing for a travel trade journal. His age was beginning to show, but he was still Barnaby Jones in the flesh, and still a trouper. When he saw my $60 point-and-shoot camera, he didn’t turn a hair. He simply struck a pose.

He did, finally, get frail and white-haired and snaggle-toothed, but once upon a time—oh, how that man could dance.
Posted by Chester Campbell at 12:00 AM

Thanks for this stroll down memory lane.

I ran into Buddy a year or two before his death at a bar next to the Balboa Bay Club in Newport Beach. I walked in expecting to see a lawyer for a meeting, and there was Buddy at the bar. Well, my lawyer friend was late, so I ordered a beer and sat at the bar. Found Buddy to be very genial and chatty, not drunk-chatty, just friendly. We talked for twenty minutes or so before my lawyer friend arrived and he and I moved to a table. I wish I'd asked him for an autograph, but that might have spoiled the moment. I left very impressed with Buddy Ebsen. Buddy wasn't snooty or self-obsessed at all. He seemed genuine and a truly nice man.

Terrie,
I checked your blog and saw the info about J.A. Konrath. Thanks for the tip about the NEWBIES book. I hurried over to the web site and downloaded all the freebies.
Pat Browning

Ben,
I love hearing that he was hanging out at a bar in his 90s. How funny, but not surprising.
He was one colorful character. Lawrence Block should do one of his Toby Peters stories with Buddy as a character.
Pat B.

Lonnie,
I love the old movies! They don't make 'em like that anymore. (-:
Pat

Joe Konrath is a fabulous writer who gives selflessly to those of us who are still learning. (And who isn't??)

I was a big Buddy Ebsen fan. I don't know if "stars" such as he are made any more.