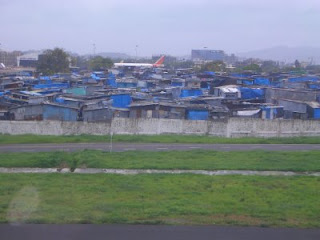 Recently, while awaiting take-off clearance in Mumbai, I gazed upon the shanties that butt up to the airport. My aircraft is close enough to where a well-placed rock can damage it. From the other side of the boundary wall, people watch airplanes from grass-covered landfills or the nearby mosque. Busses pick up laborers whose weekly salary won’t buy a pack of US cigarettes. But in spite of these hardships, a man a wingspan away smiles and waves at me with the enthusiasm of a ten year old. I smile and wave back, humbled, wishing everyone could see the world as I do.
Yes, there is poverty in our own country, but nothing like this. Shanty residents know nothing about cell phones, iPods, or video games. Owning a car is beyond a squatter’s comprehension. Millions of young men will leave their villages with the hope of finding work in Mumbai, and subsequently land in these fetid, squatter camps. At best, employment is sporadic, and what they do find usually entails the worst jobs. They eat whatever they can scrounge, bathe in filth, and yet they are basically happy people with strong ties to their cultural values and beliefs. In most instances, their education comes from whatever their elders pass on, and it is rare that they acquire any consistent, formal education. The children they raise will have no concept of entitlement, but instead realize that they will never ride in the airplanes they so envy.

Interestingly, while these communities are packed with people, crime is not tolerated. Why? Because squatters tend to look out for each other. Mess with your own people and you’re cast aside. Being alone in Shanty City is a fate worse than death.

Every day is a struggle for these people. They know nothing about a switch giving light, a flushing toilet, or purified water pouring from a tap. Refrigerators aren’t necessary, for they have no source of reliable electricity, and there is little money for food. To the children, discarded trash is a gift. Their knowledge of new products comes from newspapers or magazines blown their way. But when the sun sets, these families all gather together, grateful they made it through another day.
Posted by Mark W. Danielson at 11:42 PM

I saw the same sort of poverty in Morocco, yet found the people from shantytown uniformly happy and friendly. It gives one a different perspective, doesn't it?

It just goes to show that true happiness comes from the heart, not the wallet.

Mark,
Isn't Mumbai what they're calling Bombay these days? Are you there on business or pleasure?

My experience as a tourist in the early '80s was so different. I was a guest of India's tourist bureau so I got the very best look at everything.

I do remember the fires and beggars lining the road from the airport. When I came home I read "A Night in Bombay" by (oops, can't think of his name -- Louis Bromfield??) and was amazed at how little Bombay had changed between the time he wrote his book and my visit. Now I'm sure I wouldn't recognize it.

Maybe I should do a blog later about it.

Yes, Mumbai used to be called Bombay. The name change was part of the process of disassociating India from the former British Empire.

If the air was clear, Mumbai would be a beautiful spot, located on the water as it is. India is interesting in that the majority of its population lives in a few major cities. With over a billion people now, that breeds some serious infrastructure problems.

Dubai, Mumbai, and Delhi are among my FedEx layovers. The enormous amount of cargo we fly out of these places is a direct reflection on our global economy. I hauled 192,000 pounds of cargo out of Dubai the other day -- most of which originated in India. That's what out-sourcing does for us.

I think you should write a blog about your experiences there. As the saying goes, "the more things change, the more they remain the same."