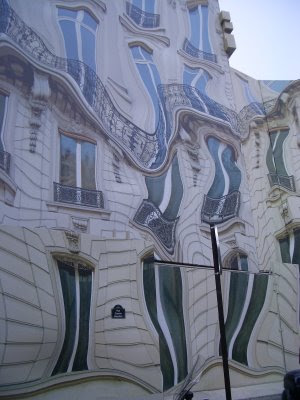 What do you see in this photo? Look closely, for I’ll quiz you later. Here’s a hint – it’s in Paris.

Last week I walked from Le Meridien Hotel in MontParnasse to the Pont Alexander III Bridge, which overlooks the Seine. It was a beautiful day with partly cloudy skies and mild temperatures. On Monday mornings, tourists are few. A woman swept cigarette butts off the sidewalks. A bum quietly sat with his muzzled German Shepard.

I passed Les Invalides where its golden dome shields Napoleon, and flowers bloom between bullet-shaped hedges. Beyond it is the extravagant Pont Alexander III Bridge, which leads to the Grand Palais. To the southwest, Tour Eiffel stands as a sentry to the city. All three landmarks were originally built for the 1900 Universal Exhibition, and are must sees for tourists. And therein lies the problem.

Overlooking the Seine from the Pont Alexander Bridge is always a pleasure. Tour boats packed with waving people pass underneath as bridge people wave back. Most on the bridge are admiring the scenery, unaware of prowling illusionists. I was enjoying the scene when a woman in her late twenties approached and placed a men’s gold wedding band in my hand. First speaking in French, and promptly switching to English, she said she had found it in front of me, and insisted that I keep it as it would do her no good. Every time I tried handing it back, she closed it in my palm, insisting that it was good luck to find gold. She kept pointing things out on the ring to hold my interest, and as I felt the gold in my hand, I kept wondering who I could turn it over to. But the longer she spoke, the more I realized the ring wasn’t there until she showed up, and that’s when things started clicking. For a moment, she pretended to walk away, but then quickly returned saying she needed money for food. I don’t carry cash when I’m walking around, and I didn’t ask if she accepted Master Card. Of course, she wasn’t convinced that I was cash poor, so I emptied my pockets, coming up with my folding cheater glasses. She eventually left with her ring, leaving me to recapture my moment, but it never came. A quick glance at the opposite end of the bridge confirmed she was seeking another mark. I felt duped for having been drawn into her illusion.

On my way back to the hotel, my mind replayed the scene like an endless video loop. I wondered how many times the con artist would use her scam today, and how many would actually give her money. Ironically, the bum with the dog that I passed earlier was given food from an elderly lady for doing absolutely nothing. Maybe the girl should trade her ring for a dog.

Some may blame this incident on “the French”, but I assure you, we have plenty of con artists in the US. I chock this up as another credit from the school of hard knocks. At first, I believed the ring was real, just as you may believe the photo above is distorted. Actually, the photo is quite clear; just look at the sign post in front of it. But the French don’t believe in simple tarps while resurfacing buildings. Instead, they create masterful facades to mask their construction. Some are of sporting events, and in this case, it’s a distorted building. Feeling duped? Join the club! It just goes to show that no matter how street-wise you think you are, there will always be someone smarter. Hmm – sounds like there’s a story in there somewhere.
Posted by Mark W. Danielson at 8:51 PM

A day in Paris! Sounds wonderful, Mark. Since I can't be there in person -- thanks for fueling my daydreams. (-:

Pat, Paris IS wonderful. Forget any negative thing you've ever heard about the French. I visit France at least a dozen times a year and aside from a couple of minor scan attempts in tourist areas, I have never had a bad experience there.

We tend to forget how connected we are to the French. They saved us in the Revolutionary War, and we saved them in two world wars. Let's call it even and move on.

I make an effort to share my travels through this blog and my web site realizing how fortunate I am to travel as I do. Flying a plane sure beats working for a living.