A guest blog by Marja McGraw

It seems that something unexpected usually inspires a story for me. I won’t go into titles, for the most part, in the interest of space.

In my Sandi Webster series, stories were inspired by (get this) the Red Light District in Old Los Angeles, something that actually happened to me in another book, meeting an elderly female private investigator, a photo of a vintage, abandoned house in Nevada, and an admiration for Humphrey Bogart. Another was inspired by what used to be an ostrich ranch in Arizona. An ostrich ranch? It became a llama ranch in short order and included ghostly sightings and a house with character.

Back to the admiration for Humphrey Bogart, a book titled, The Bogey Man was so well received that I started another series involving a Bogart look-alike who wanted nothing more than to become a private investigator. In his case, not all of his dreams came true, but he, his wife and young son went on to become involved in crimes, although against his better judgment.

Chris Cross, known as the Bogey Man, started a forties-themed restaurant with his wife, Pamela. Right off the bat they discovered a body in a basement. That was the beginning of an interesting life. In one book, some Church Ladies tried his patience and skills when they wanted him to find a missing friend. Some Church Ladies in my own life inspired that one. Chris’s eccentric mother came to town and more adventures followed. Yes, I know a few eccentric people, and I should probably include myself in that category. 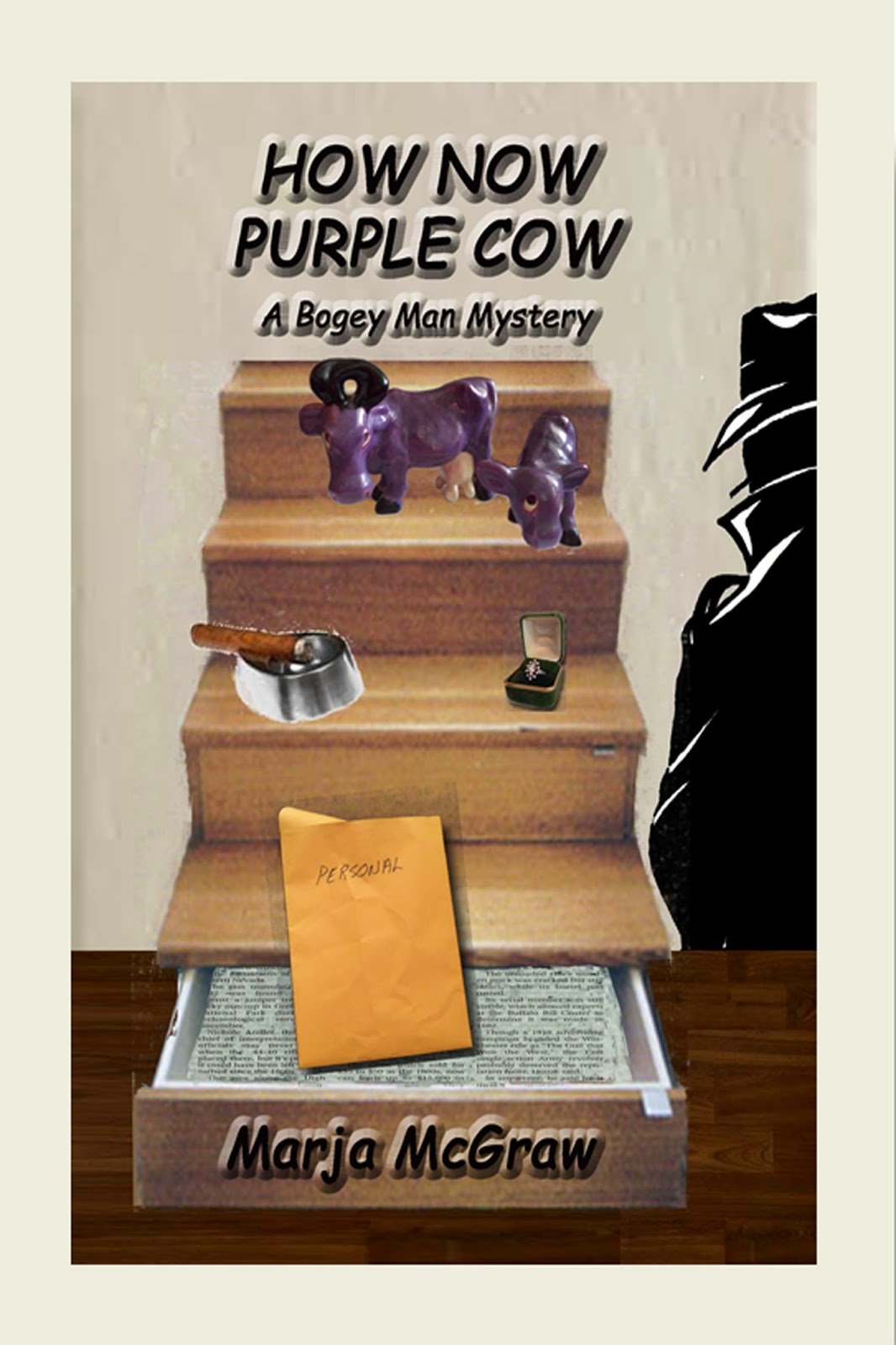 However, let me tell you that I never expected ceramic purple cows and a dream to inspire a story, but that’s exactly what happened. Many years ago my grandmother gave me some old ceramic figurines, including two purple cows. There should have been three, but apparently the bull was broken somewhere along the way. They were begging to be included in a book. I can’t explain it, but the idea simply wouldn’t let go of my imagination.

How could a writer use purple cows in a mystery? Well, if you add a dream about two close friends being spies, all kinds of doors can open.

After doing a lot of research about spies and spying, I found that only a minimal part of that research would fit the story. However, it gave me a feel for what things were like during the Cold War and what agents were up against. Maybe I’ve watched too much television, but it all seemed to fit together in a neat little story package.

Purple cows and elderly spies were a natural. Oh, and they needed just a little humor to pull it all together. If you include the young son and two Labrador retrievers in the mix, you’ve got some unusual puzzle pieces to fit together.

What could purple cows and elderly spies possibly have to do with each other?

When young Mikey Cross discovers ceramic purple cows, a ring, and investigative notes left by a mystery writer popular in the 1950s, his parents’ and grandparents’ lives are turned upside down.

Pamela and Chris Cross become involved in vintage intrigue with trepidation and more than a little angst when they find out there’s an elderly assassin on the prowl and the situation isn’t quite as vintage as they thought.

The dead just may come back as the living when it’s least expected.

I’ve tried to write all of my books so they can be read in any order. The only thing you might miss by reading them haphazardly would be the growth of the characters. That’s livable.

I enjoy being entertained when I read, and that’s what I’ve tried to do for readers of my books. I hope I can make you laugh, or at least chuckle, and in addition I hope the puzzles keep you guessing.

Hmm. I did write one book where the killer was fairly easy to spot. Ah, yes, there was an unexpected twist at the end. Always keep the reader guessing.

So, if you’re inspired as a reader, you might try How Now Purple Cow to see how purple cows and elderly spies fit together.

Jean, thank you so much for inviting me in today. I had a wonderful time talking about inspired stories.
_____________

Marja McGraw was born and raised in Southern California. She worked in both civil and criminal law, state transportation, and most recently for a city building department.  A resident and employee in California, Nevada, Oregon, Alaska and Arizona, she wrote a weekly column for a small town newspaper in Northern Nevada, and conducted a Writers’ Support Group in Northern Arizona. A past member of Sisters in Crime (SinC), she was also the Editor for the SinC-Internet Newsletter for a year and a half.

Marja has appeared on KOLO-TV in Reno, Nevada, and KLBC in Laughlin, Nevada, and various radio talk shows. She says that each of her mysteries contains a little humor, a little romance and a little murder! She and her husband now live in Arizona, where life is good.
Posted by Jean Henry Mead at 12:00 AM

Welcome to Murderous Musings, Mara. I look forward to reading your new release.

Thank you for inviting me, Jean. I hope purple cows and elderly spies entertain you.

Well done, Marja. I LOVED this blog telling me what inspired you to write this particular series. I can hardly wait to download the book.