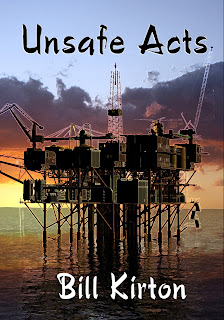 One of my claims to fame (he says, as if there were several) is that I earned an acknowledgement in Ian Rankin’s dagger prize winning novel Black and Blue. Members of the ’s Crime Writers’ Association are asked to list any areas of ‘special expertise’ so that fellow members can contact them if they need information on different topics. I’ve written countless videos and DVDs  about offshore safety as well as actual safety induction programmes, so that was one of my ‘specialisations’. In Black and Blue, Rebus had to make a trip to an offshore platform and Ian wrote to ask what sort of thing that involved for a ‘visitor’. I wrote back and thereby got myself a mention.

So, apart from name-dropping, why am I writing this? Because I recently had to check the text of Unsafe Acts, the fifth novel in my Jack Carston series and, as the cover image and the title suggest, it involves an offshore platform and safety. It also involves homophobia and deplores the fact that, even in the 21st century, its corrosion is still highly active.

It’s been through several drafts and, as I was reading through it again, I experienced once more the strange feeling I often get that, while I know I’d written something and my name’s on the cover, it’s hard to remember how it happened. When something’s out there as a self-contained thing – whether in tangible form as a paperback or in the same completeness as an ebook – it somehow seems instantaneous. The book has become a self-contained fact. When you’re writing, you’re always poised on the edge of wondering what the characters are going to do, where they’re going to go. The process is one of ‘becoming’ rather than ‘being’. So for me the writer, Unsafe Acts was a succession of instants which eventually stopped. But for me the reader, it’s a complete, set thing with its own internal logic and a journey which has only one path. I suppose for readers coming fresh to it, the uncertainties are still there because they don’t know where the characters will take them until they’ve arrived.

The other question I sometimes ask myself, when I’m reading a novel I’ve written, is the one that most writers hate: ‘Where did this idea come from?’ And again, it’s often difficult to answer. With Unsafe Acts, I know that the seed was sown in a casual remark from a friend, Mike Lloyd-Wiggins, who said one day ‘You ought to write about an offshore platform. There’s plenty of stuff going on out there.’ (This was the same friend who also said, a few years ago ‘You ought to write a story about a figurehead carver’. So thanks, Mike.) But that’s just the seed. When you see the dense vegetation that’s grown from it (I know, it’s a lousy metaphor, but I’m lazy) you really do wonder where all these people were hiding, what made them appear. Where did they get their attitudes?

One other interesting thing about this book (for me anyway) is that my detective is a different Jack Carston from the one I first met when I wrote Material Evidence. Of course, I’m different now from the person I was then but I don’t think that means we’ve followed the same path. He now seems so fed up with the hoops he has to jump through to satisfy his superiors and tick the right administrative boxes (this time, the metaphor’s not only lousy, it’s mixed, too), that I really wonder whether the next book will find him leaving the job altogether. The alchemy of reading is always fascinating but when it’s your own story you’re reading, the mystery has a different edge.