The history of my new thriller involving the theft of Soviet Army nerve gas has an interesting twist. It was written back in the early nineties and accepted by a large New York agency that let it sit on the shelf for a couple of years. Why? I have no clue. After changes in the agency's management, the book was submitted to editors. I only saw one rejection letter, which came from Tor-Forge. The editor liked the book but said it was "dated." The irony is that his comments came about the time of the sarin gas attack on a Tokyo subway in May of 1995. If the manuscript had been sold in the first year the agency accepted it, the book would have been published about the time of the sarin attack. 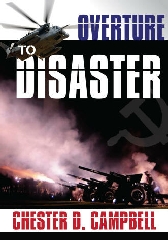 Fast forward eighteen years. After languishing on my office floor for eons, I re-edited and revised the manuscripts of my Post Cold War Political Thriller Trilogy. Night Shadows Press published the first two as ebooks, then paperbacks. The third, Overture to Disaster (click to view), has just been released for the Kindle. It appears in the midst of the widespread news coverage of a sarin gas attack on civilians in Syria. A different twist on history repeating itself.

The "political" slant of the book came from my reading of Gary Allen and Larry Abraham, whose conspiracy theories dwelt on the New World Order. I created the Foreign Affairs Roundtable (FAR) and Council of Lyon to mirror the organizations Allen and Abraham accused of being shadow groups behind efforts to create a New World Order.

Their writing claimed that international bankers helped finance the Bolshevik Revolution and the Soviet Union over the years. I quote the FAR president as sharing their view that there was never any credible threat of a Soviet military strike against the West. He insisted "The top communists were not about to bite off the handouts that were feeding them. Gorbachev, good soldier that he was, had fought to the end to preserve the status quo. His big problem lay in his outmoded economy that was sinking of its own dead weight. He had just about worked out a method of holding the union together when that group of dull-witted underlings had staged their amateur coup."

This led the FAR to support a dissident group of hardliners with plans to reorganize the former Soviet republics into a new socialist government the one worlders could more easily deal with. What they didn't realize was the depths to which the plotters would go to keep the U.S. President out of the picture. The three principal characters in Overture to Disaster find themselves the only hope of thwarting the use of nerve agents against a large crowd.

Read more on my website.
Posted by Chester Campbell at 4:49 PM

The book sounds fascinating, Chester, and certainly contemporary. I look forward to reading it.

Thanks, Jean, it was fun to write, and I learned a lot in the process.