WHERE DO I BEGIN?

Ideas for stories are not hard to come by.  Everywhere I look, I see something I could develop into a short story or a novel.  Coming up with characters to populate the story is not difficult either.  Once the story rolls around between the ears a few times, people materialize who want to be in it.  Things that happen during the story come easily, too. Once the story is underway, I come up with a multitude of things that could happen.  It’s only a matter of choosing the best ones.  Endings?  Maybe the easiest of all.  There are only a small number of places where the story could lead and how it could end.   Again, it’s a matter of choosing the best one.

So what is NOT easy for me in a new story?  It’s where to begin. I have trouble coming up with the perfect opening sentence or paragraph. Even though I already have a good grasp on the basic plot,  what characters will be involved, what will happen as it plays out and where it will all wind up, I can’t start writing until I’m sure exactly where to begin.  I need that first scene to start the ball rolling.  Once I have that, it doesn’t take long to knock out the whole story.  At least, the first draft.

For example, I’ve wanted to write a sequel to my first novel, MEMORY OF A MURDER, for quite a while.  I knew the plot and the paths Adam Kingston, the protagonist, would follow.  My problem was, where to begin the story?

Then I thought back to that first book and about how it began.  In the opening scene, Adam is awakened by a woman’s voice saying:

"Adam Kingston! Get your skinny butt out of that bed."
Her voice cut through his sleep and made him cringe. He pulled his face out of his pillow, forced one eye open, and turned his head far enough for a squinting glance around. Yes. He was in his own bedroom.
He opened the other eye and focused on the figure standing at the foot of his bed. Slim, well-dressed, skin the color of cocoa, arms folded across her chest, dark eyes boring into him. He plunged his face back into his pillow and mumbled, "Dammit, Ellie."

After thrashing about in vain for a good opening to the sequel, it finally occurred to me I might begin it in a similar manner.  I decided to give it a try, and the opening turned out to be the same woman’s voice saying:

“Adam Kingston, what the hell have you done now?”
Adam grimaced and held his cell phone away from his ear.  Ellie always yelled when she was pissed.
“I didn’t do anything, Ellie. I only called to ask--”
“Did you pull one of those stupid practical jokes on her like you and Phil do to each other?”

Yes! That worked.  That opening brought in the main character along with an important secondary character in a situation that would allow me to open with a subplot and easily seque into the primary plot.  Once I had that opening scene, the rest of it followed along just fine.  Not that it was easy, mind you.  Writing is never easy, but once I had the opening, I was on my way.

Now you know one of the problems I have every time I begin a new story.  Maybe other writers have the same problem.  By that I mean, they can’t begin a story until they have what they feel is the perfect opening line.

Or, am I strange and different from everyone else?

Naaahhhh.  There’s nothing wrong with me. 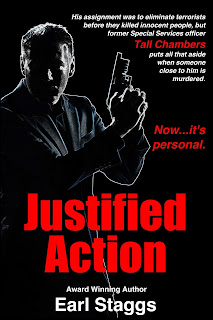 Move over, Reacher.  Step aside, Bourne.  Tall Chambers is in town and nothing will stop him. They murdered someone close to him.  Now. . .it's personal.

JUSTIFIED ACTION is available in print or ebook form at: http://tiny.cc/e85ftw

“. . .a high-octane thriller that will keep you reading through the night.”   Mark Troy

Read Chapter One at:  http://earlwstaggs.wordpress.com

Usually whatever gave me the idea also gives me the opening. Though I do wonder at times if I can make it a better opening thanks to reading way too many pieces on the importance of the opening.

Beginnings are my weak point also. I'm great at endings, but I always have trouble with how to start :-( What I have found that works best is to simply start writing--and somewhere around the second or third page, something will jump out at me and say "I'm the perfect beginning!"

Beginnings used to be my weak point, but I now find that the last paragraph of the book is the hardest. It's got to be just right so the reader will want to read the next book in the series.

Sometimes I have the beginning, sometimes not. And sometimes I think I do, but it's pointed out to me that I don't. For this series, I think you've hit in an elegant solution. You can begin all the books in this series this way!

Your new opening is great! Can't wait for the book. Nowadays I try to hook the reader with the opening, but sometimes I fall way short. : )

It's the middle that's my problem. I know the beginning and ending, but sort of sag in the middle. Oh, no, that's my figure, too.

If I have trouble with an opening line, I pull some of my favorite books off the shelf and read their first sentence. I do the same when I'm writing an article and can't get started. This usually gets my creative brain working.

Yes, the opening sentence has to grab the reader. Also, it can seem perfect at first, then later not so great. It's one of life's mysteries at times.

Usually start when something changes. Sometimes on the second draft I alter the beginning. But I always think that beginnings are like the dreaded synopses - just plain difficult.

Thanks to everyone who stopped by and left all these interesting comments. It's just not exactly the same for all of us, is it? What's hard for me can be easy for others. It's a crazy thing, this writing thing we do. Maybe that's what makes it so challenging to do and so rewarding when we get it right.