Revisiting The Catcher in the Rye 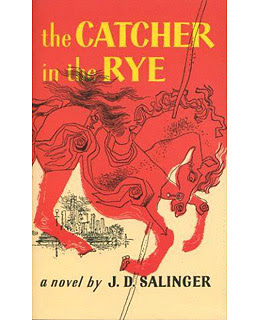 A local bookstore held a Banned Books seminar to celebrate its twenty-fifty anniversary, inviting local authors to select a book and discuss it. I signed up for Salinger's classic story of a depressed sixteen year old boy describing his three day breakdown, which meant, of course, that I had to read The Catcher in the Rye again. I'd read it first during my high school days, when it was a kick to pick up a banned book. I raced through the thing, panting with the pressure of hormones, expecting passages like those found in Lady Chatterly's Lover.  Alas, I had to read it over again. It was not what I'd expected.

Then, twenty years later, I picked up The Catcher in the Rye when my son appeared to be going through some of Holden's angst.

And so, the third time.

And The Catcher in the Rye did not disappoint.

But this time, instead of trying to fully understand Holden Caulfield, I had different thoughts, wondering what would happen to him today, and what likely happened to him back in 1949, when the book is set (Note: Copyright date is 1945.)

In the last passages of the book, Holden won't tell us what happened after his three hellish days, just that he's seeing a psycho-analyst. This caused me to think about how mentally ill people were handled back then.

I wondered how a sixteen year old boy, depressed because he's just been tossed from his fourth swanky college prep boarding school would handle electro-shock treatment. If anything, I'm sure such treatment would make Holden more unstable, would eviscerate his self esteem and assure him that he was in fact crazy, as he often tells us.

Holden's father is a high level corporate lawyer, someone who travels extensively and is paid well. Holden doesn't tell us much about his mother. But one can sense that Holden was sent to boarding school to get him out of the house, especially after Holden's little brother died of leukemia three years before. And the timing works. Four schools translates to at least two years at the very least, perhaps more. We don't know how long it took Holden to sink into the dark tunnels of depression. So, it's very possible his parents decided to send him away, perhaps to get him out of the house and avoid the constant reminders how close Holden and his dead brother had been. Perhaps for some other reason. We don't know if Holden's two brothers attended boarding schools.

The basic problem is that Holden didn't fit in at these schools. These are high powered schools, probably located in Connecticut, some of which cost $35,000 per year and brag of such graduates as George Schultz or Henry Kravitz. When Holden is challenged, he gives up, lest he fail anyway. He claims he's just not interested, while we, as readers, know he's covering up for fear of failure. Holden defends his angst by noting the phoniness of his classes, his schoolmates and everyone he meets.

But Holden's not mean. Holden shows compassion for little children and delights in watching them. One senses it's their innocence that he admires. And this innocence seems to inflame Holden because he knows he's lost his. His drinking and the vehemence of his unpopular opinions seem to increase after he's watch children play.

Yet, many of Holden's insights are valuable today. For instance, Holden's take on actors, their phoniness. I chose to read two pages of Holden's rant against actors as he remembers to buy theater tickets for his date with old Sally. I could have just opened the book and read any passage, because one can just about do that and find something meaningful, but I had heard some actor using his bully pulpit to mouth off about politics, something no doubt he knew little of, and something no doubt contrived just for publicity. I especially enjoyed the quote:

"I hate actors. They never act like people. They just think they do. Some of the good ones do, in a very slight way, but not in a way that's fun to watch. And if any actor's really good, you can always tell he knows he's good, and that spoils it."

But reading the book also caused me to wonder what would happen to Holden Caulfield today.

I suspect he may be on drugs. I also suspect he'd be diagnosed with all sorts of mental illnesses or learning disabilities, and would probably be secluded from other students under No Child Left Behind -- which may just increase his alienation, solidifying the notion that Holden doesn't fit in -- he's deficient. Holden would probably be on anti-depressants, maybe shot full of Ritalin or other drugs. He may be diagnosed as Bi-polar.

Would any of these diagnoses or drugs help Holden?

It's hard to say. Many of his problems relate to lack of a supportive family involvement, the feeling of being cast off and out. He misses his dead brother terribly, and there's no one to comfort Holden. He's sent away.

I could go on and on about this book, but this is a blog, not a study guide. I will read this book again and again, as it still has relevance today, with valuable insights and issues that haven't changed much despite the passage of seventy-some years.

Labels: Holden Caulfield, The Catcher in the Rye

Ben , I read THE CATCHER IN THE RYE when I was about 15 and absolutely hated it. I kept thinking, "That boy needs to be nicer to his parents! Doesn't he see that they're grieving?" I had much more sympathy for Holden when I reread the book as an adult and could relate to Holden as a troubled student rather than as a peer. Then I could better appreciate what Salinger had accomplished. It's a book that works on many levels. Thanks for your insights into it.