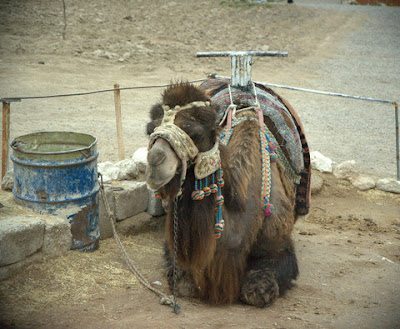 My wife and I have just completed a month-long trip driving through Turkey and Greece, a fun and educational trip not without its lessons, a few of which I'll share.
Turkey 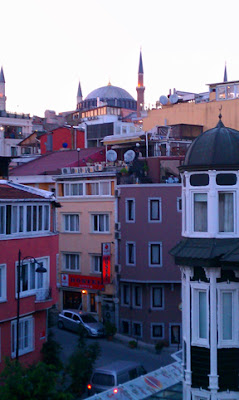 Driving is a breeze in Turkey once one learns the rules of the road. And there's only one: Flash your lights before you steal the right of way. Anything else goes. Ignore traffic signals, pass on mountain curves and drive as fast as you want wherever you want. You don't even need lights at night.
Don't ask for bacon and eggs for breakfast in Turkey. While egg may be good for your hair and complexion, it won't improve your immediate facial appearance and your hair gets sticky.
Avoid Konya, Turkey. There are no bars.
The camel is not your friend. Try patting one on the head and you may lose some fingers. Don't kiss one either. They spit, and camel spit is not a delicacy.
Criticizing Turkeyism is a crime. If someone asks you how you like Turkey, say you love it, whether you do or not. In our case, this was not a lie.
Mohammad must have looked like an ape. You should see his tooth in the Topkapi Reliquary. Working on him would have made a dentist's year.
Burqas must be air conditioned. Conservative Muslim women wear them in insufferable heat.
The hot looking tall blondes in mini skirts and deeply cut tops in Istanbul are Russian hookers. They will bleed you dry and piss off your wife.
Everybody in Turkey is selling a rug. And I'm not talking hair pieces.
If anyone tells you a rug is made of silk and cotton or wool, they're a fraud. Silk cuts through other fibers like fishing line through a spider web.
Efes is one of the world's best beers. One needs lots of them to drive in Turkey.
Many toilets in Turkey are a hole in the floor. Toilet paper is optional.
Don't drink the water or you'll be quite used to holes in the floor and no toilet paper.
Rent as small a car as you can find. Turkey has no oil or gas. Gasoline costs about $14/gallon.
In most cases, Turkish women look better in a burqa than without. Just sayin'...
And Turkish men? Don't ask. There's a very good reason why many of them have bushy beards and mustaches. Without them, they'd look like coyotes.
Avoid drinking Raki, the Turkish national drink. It makes Turkish women look better and provides a never-ending headache, which is why Turkish women give it to their men. So they can get married.
Greece 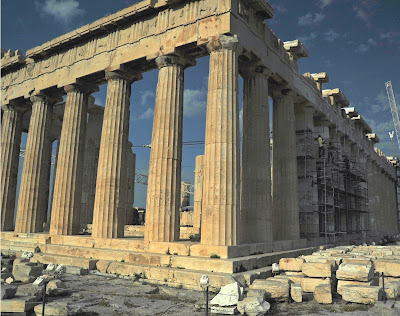 Triple-parking on a two lane street in Athens is standard. So is falling asleep on the horn. New Yorkers will feel right at home.
Every car in Athens is dented. They come that way.
Any car larger than a SmartCar in Athens is insane. But then, so are Athenians.
Take what I said about driving in Turkey and multiply it by three for Athens. A solution to the Greek debt crisis would be to remove all traffic signals. Athenians don't follow them anyway.
Arrive at the Acropolis at its opening, 8 A.M. The hordes of Japanese tourists begin arriving at 9. They'd blot out the sun if they were taller.
Greek food is the same as Turkish, with the exception of adding pork to the diet. They just call it all by different names.
Don't wear a Turkey baseball cap in Greece. Again, egg does not look good on your face and hair.
Greeks hate everybody; it's not just Americans.
If a car comes at you on a one lane mountain road, drive over the side. It's better than a high-speed head-on collision.
A day at the beach can be painful. And it's not just the unrelenting sun. There's no sand, only rocks, big ones at that.
Don't look for Sparta in Sparta. It's in Mystras.
Greek camels aren't any more friendly than Turkish camels. But they can spit further.
Grecian hookers are Tunisian. That's why the Greeks love Tunisia.
Document each dent in your rental car before you drive it, even though doing so may take all day. You will add to them.
Greek women should wear burqas. In most cases, they'd look better, even if a burqa doesn't always cover a mustache.
Get a GPS. The Greek alphabet makes reading road signs impossible.
Don't be surprised if your GPS tells you to find a road when you're on one. Some of the GPS satellites must be on strike, too.
If the tour guide says a state-operated tourist site is open until 7 P.M., get there before 3. Government workers are pissed; they're closing tourist sites early so they can drain Greece's only source of income.
Don't fret about dining tables in the middle of streets. Yes, they are streets intended for cars; yes, there are people dining on them. It's Greece; anything goes. And don't feel bad about making these people move their tables, spilling their drinks all over the street. Ignore their curses, their gestures. They're Greeks; they hate everybody. Besides, the roads will dry.
Mythos is the best beer in Greece. And it wears well when Greeks throw them at you.
Avoid Ouzo. It does for Greek men what Raki does for Turkish men.
Greek men make Turkish men look good.
Note: This is in jest, so don't anyone think about cutting off my head. Besides, as my wife says, there's nothing inside it anyway.
Posted by Unknown at 12:00 AM

lol, Ben. I think I'll scratch Greece and Turkey off my travel itinerary.

Ben, reading your travelogues is almost as good as being there--and in this case, was probably more fun!

Actually, we loved Turkey, and we loved the Peloponnese. We'd go back in a heartbeat. There are no beggars in Turkey. It's essentially a full employment economy. They've got year-over-year GDP growth of 7.2%. We liked everyone we met in Turkey, every single one, in two and a half weeks. How rare is that? My feeling about Turkey was that I could live there. We met only people who were genuinely interested in us, and they love America, compare themselves to us before we became a media-centered, lawyer-driven, self-centered culture. I wrote this in jest. It was a wonderful trip.

Ben, it came through. I liked Mexico too, when I was there--but oh, the driving! I had to close my eyes when we went anywhere and just thank goodness someone else was behind the wheel. Turkey sounds nice too, except for the driving, I even like camels.

I didn't have any problems driving in Turkey or Greece, but my wife rode everywhere with a death grip on the door. Crossing the mountains in both countries left her near apoplectic. I just wished I'd had a sports car. I thought the mountain roads were fun, the cities not so much. But spectacular scenery, much of which left her gasping, "Oh my god!"

I wouldn't want to drive Mexico right now. :) Maybe someday, but I suspect that will be a long time...

One interesting aspect about Turkey: When we went to Morocco, everywhere we went somebody asked us what we thought about the Israeli/Palestinian situation, with strong opinions offered. Nobody asked us about it in Turkey. Nobody talked religion at all. Very refreshing. We felt very safe in Turkey, more so than in Athens. You could smell the tension in Athens. In the Peloponnese, we were treated as tourists. In Turkey, we were treated as friends. Big difference!

Hey, great lessons haha. I have a question, did you rent a car? As far as I know rental companies won't let you take the car from Turkey into other countries. Do you know about Macedonia & Bulgaria?

Istanbul’s Grand Bazaar which can even stop the non-shoppers for hours. The place has around four thousand shops which a scintillating collection of handmade carpets, jeweler, leather, antiques, and souvenirs. Get some beautiful Istanbul products and enjoy the night of Greece Turkey Tour Package.