Research That Blew Me Away! 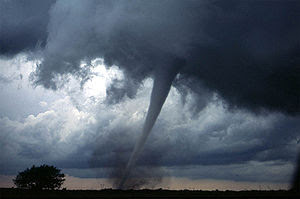 I was working on my latest book project when a tornado abruptly blew onto the page, forcing me to do some storm research.

Tornadoes are infrequent here on the high plains but whenever they’ve happened, the after affects have usually been deadly. One of the most notable occurrences was when several residents of Wright, Wyoming, living in a mobile home park, were killed by a tornado. Last year a woman pilot was killed while attending a baseball game near Casper. But the most widely reported tornado was the one that blew the spout from Teapot Rock, which has symbolized the infamous Teapot Dome bribery Scandal of the Warren Harding Administration in 1921.

From my research, I learned that the U.S. has more tornadoes than any other nation and that the only country that hasn’t recorded them is Antarctica. That doesn’t mean they haven’t happened but the Penguins haven’t reported them.

I happened upon a report from Germany, which stated that America has twenty times more funnel clouds than Germany, Austria and Switzerland combined. The statistics were gathered from 1587 through 1999, although, admittedly, some had gone unreported during the early years.

Most tornadoes happen east of the Rocky Mountains during spring and summer. In an average year, according to the Department of Commerce, some 800 are reported nationwide, which cause an average 80 deaths and over 1,500 injuries. The DC calls them the most destructive storms on the planet with wind speeds in access of 250 mph.The damage paths can exceed a mile wide and up to 50 miles long. To illustrate a tornado's power, a motel sign in Broken Bow, Oklahoma, was once carried 30 miles and deposited in Arkansas.

But what causes tornadoes? Thunderstorms which develop in warm, moist air collide with eastward-moving cold fronts. Large hail, strong winds and tornadoes are usually the byproduct. However, tornadoes that develop in winter and early spring are often caused by strong, frontal systems that form in the Midwest and move eastward. Sometimes, a large outbreak of tornadoes occur during the cooler months and several states may be affected.

During the spring in the central plains, thunderstorms frequently develop along a "dryline," which separates very warm, moist air to the east from hot, dry air to the west. Tornado-producing thunderstorms may form as the dryline moves east during the afternoon hours.

Along the front range of the Rocky Mountains, in the Texas panhandle, and in the southern high plains, thunderstorms frequently form as air near the ground flows upslope toward higher terrain. If other favorable conditions exist, the thunderstorms can produce tornadoes.

Before I put my readers to sleep, I’ll abandon further research to return to my struggling novel characters as they crawl beneath a wagon to escape the storm. Little do they know that they may blown to Kansas. But that's another story . . .
Posted by Jean Henry Mead at 12:01 AM

I've lived through quite a few earthquakes in California but I've never seen a tornado. And I hope I never will.

I was in one earthquate (the 1989 quake in San Francisco), and that was plenty for me.

We've had a couple of tornadoes touch down here, but fortunately, I haven't been close enough to see one up close.

No doubt about it, Jean, twisters suck! They've danced around me in various locations, but so far I've managed to elude them. The park near my crash pad in Olive Branch was hit while I was in town, damaging numerous houses and bending the steel supports for the scoreboard and also the bapppark boundry post. No such thing as a tame tornado.

I'm not sure why they're so attracted to mobile home parks, but there may be a connection between the metal in the homes and static electricity. Whatever it ism keep 'em away from me!