Korean War Memories That Led To a Novel 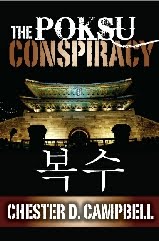 My second Post Cold War Political Thriller grew out of experiences dating back several decades. The Poksu Conspiracy takes place about half in Korea. I got my first taste of the Far East as a young lieutenant in the Air Force. That was early 1952 and Japan was still digging its way out of the mire of World War II. I arrived at Yokohama on a troop ship and was transferred to a processing station. I had little chance to see the area with only a brief visit to the adjacent town. It had lots of broken English signs luring GI's into a variety of businesses.

After getting my assignment to the Directorate of Intelligence at Fifth Air Force Headquarters in Seoul, I lugged my B-4 bag and portable typewriter onto the train and we headed southwest. One of the last stops before we crossed over to the island of Kyushu was the most memorable. I'll never forget hearing the conductor calling out, "Hiroshima, Hiroshima, Hiroshima!" This was a little more than six years after the A-bomb drop. We were in the city for only about fifteen minutes, but I got off and looked around the area. There was little visible of more than one story.

Our destination was the town of Fukuoka, home of an Air Force base from which I was flown to South Korea. My first view of Seoul was of a city with many buildings destroyed, streets in disrepair, other structures bearing holes left by bullets as well as artillery shells. Fifth Air Force was located in the former medical school of Seoul University. The main building housed offices. The DI was on the second floor, down the hall from the Joint Operations Center, which worked in cooperation with the Army, and the Tactical Air Control Center. I spent many off-duty hours in the TACC watching airmen move tokens representing aircraft, enemy and friendly, over a flat map of Korea that covered most of the room. Using earphones scattered about the perimeter, I listened to radio transmissions from the pilots.

The Eighth U.S. Army was headquartered on the main university campus across the street. I attended a few of Gen. Mark Clark's briefings over there.

My job in the Estimates Division was to track enemy activities. I received copies of all debriefings of aircrews that included reports of enemy air activity. From these I tracked patterns of MiG fighters flying down from China. With this and reports of pilot chatter, it became obvious the Chinese were using the war to train their pilots as well as Russians.
One of my Korean War mementos that sits on my desk is a brass plate with my name in embossed letters. It has a Korean scene on the back. The ingenious Koreans who made them used brass from artillery shells left by troops sweeping through the area. During an R&R (Rest and Recuperation) visit to Japan, I brought back solid silver candelabra, beautiful cloisonne vases, and a set of Noritake china.
The Seoul that appears in The Poksu Conspiracy is the one I visited in 1987 during a month-long tour of the Far East. It is a burgeoning metropolis that hardly resembles the town I knew in 1952-3. My protagonist, Burke Hill, also visits Chiangmai, Thailand, a unique city I toured during that trip in 1987.

Scenes in  Beware the Jabberwock, first book of the Post Cold War trilogy, take place in Hong Kong and involve locations I also visited during that Far Eastern tour.

Click these links to read about Beware the Jabberwock or The Poksu Conspiracy.
Posted by Chester Campbell at 1:00 AM

Wonderful article, Chester. I'm sharing this on my Facebook page. It seems to me that the Korean War doesn't get the attention it deserves in history. Your book sounds wonderful.

Thanks, Jackie. I think the Korean war showed what China was...and is. North Korea hasn't changed a bit.

I look forward to reading the book, Chester. Fascinating history!