A COLOURFUL DEATH now in paperback

My second Cornish mystery comes out in a paperback edition in the US on October 10th. 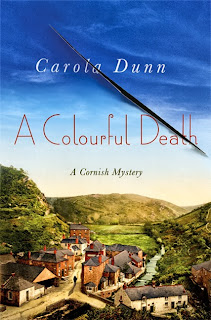 The Cornish mysteries are set in the late '60s/early '70s, in Cornwall, one of the most picturesque areas of Britain. The coast is indented with rocky, cliff-bound coves providing harbours over the centuries for fishermen and smugglers alike. With small towns, built of local granite and roofed with local slate, and glorious scenery, Cornwall has long been a haunt of holiday-makers--and artists.

One such painter, Nick Gresham, is the next-door neighbour of my protagonist, Eleanor Trewynn, a widow in her 60s. Thanks to an introduction from Eleanor, Nick succeeds in placing a couple of paintings in a London art gallery. He returns triumphant from London only to find the pictures in his shop have been slashed to ribbons.

Nick is sure he knows the culprit, Geoffrey Monmouth, an envious fellow-painter. Vowing vengeance, he sets off to confront him, while Eleanor, hoping to avert violence, accompanies him to Padstow. 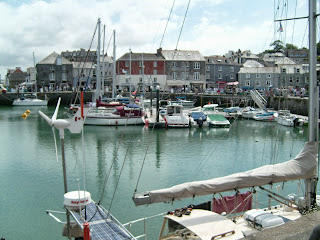 They arrive at Monmouth's gallery to find him lying dead, stabbed in the back, surrounded by a crimson pool... 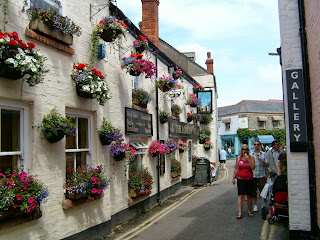 Nick is arrested for murder. Eleanor is determined to exonerate him, and very soon finds that a great many people had good reason to hate Geoffrey Monmouth.

Bolstered by strong characters, the fast-moving plot builds to a satisfying conclusion. --Publishers Weekly on A Colourful Death

Eleanor is a wonderful, multifaceted heroine and Manna from Hades [first in the series] is a first-rate story.... Carola Dunn demonstrates the same smooth writing and seasoned storytelling that readers have come to expect from her. --Mystery News

I look forward to reding a Colourful Death, Carola. I don't know why the former comment posted as it did.

Maybe the RV lot said something rude and thought better of it?