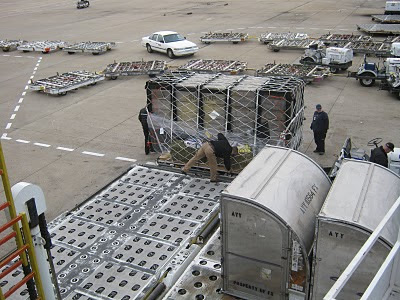 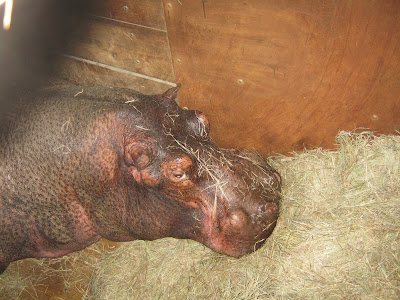 By Captain Mark W. Danielson
FedEx flies all kinds of cargo. Animals are among the most interesting. I have flown sea turtles, horses, a variety of birds, and ferrets, and can now add a hippopotamus to that list. This is Tucker’s story. If he could write, he would have painted a sign that read, “Eight Year Old Male Hippo In Need Of New Home”. FedEx came to his rescue, donating their services as a hippotarian gesture to move him from the Topeka Zoo to the San Francisco Zoo. Delivered under perfect flying conditions, Tucker is now busily exploring his new surroundings.
Tucker’s story is as interesting as his journey. Born in captivity at Disney’s Animal Kingdom, he was destined to be relocated to the San Francisco Zoo over a year ago, but the timing wasn’t right. Instead, he was transported to the Topeka Zoo where he met a lovely mate with bountiful proportions. They instantly fell in love and had a baby together on August 21, 2010. But this miracle of birth proved to be Tucker’s downfall, for the Topeka Zoo isn't large enough to accommodate three hippos. One of his handlers told me that while Tucker is very docile, the handlers were concerned that Tucker would inadvertently kill his baby by playing with him. Since the baby needed its momma, papa Tucker was being banished like Adam, except he would leave his Eden with a stock of apples.
Tucker was supposed to have been transported on November 30th, 2010, but this transportation fell through. With winter now in full swing, an appeal was made for FedEx to fly him to San Francisco. On January 6th, 2011, Tucker flew from Kansas City to Memphis, then patiently waited for me and my first officer to fly him to Oakland.
His oversize crate was approximately 1 ½ times the size of a normal MD-11 pallet. Loaded with hay and food, he was monitored by two handlers and a veterinarian. Before we took off, they assured me he was comfortable as any hippo could be. I nodded while detecting clear evidence that his internal organs were functioning perfectly. Thankfully, our airplane's rigid cargo barrier confined his distinct aroma to the upper cargo compartment rather than invade the cockpit. Otherwise, it would have been a very long flight.
Thanks to good weather, Tucker probably never knew he moved. He was a perfect passenger throughout our entire flight. Had he been upset, we definitely would have known since annoyed jumbo animals tend to bounce airplanes. But Tucker did none of that. Instead, our four thousand pound puppy seemed quite content.
On our initial descent into Oakland, the Oakland Center controller assigned a step-down altitude. To make it easier on Tucker’s ears, we requested a constant descent because of our special cargo. The controller then asked if we had horses on board. Upon hearing it was a hippo, he replied, “Cool.” From then on, we received special handling that never required us to level-off. Tucker’s information was passed from controller to controller to ensure our smooth arrival.
I elected to use the full runway length so our deceleration was gradual. The taxi in went as smoothly as our taxi out. From Oakland, Tucker's crate was transported to San Francisco via flatbed truck. The SF Zoo was very appreciative of FedEx’s service, and I was happy to be among those playing a part in his relocation. Far more people were involved in this operation than I will ever know, but Tucker's transfer was successful because it was a team effort. Now single again, Tucker is free to find a new mate while enjoying California’s moderate climate. San Francisco may not be Disney World, but it’s far better than winter in Topeka. As for FedEx – we again proved that we deliver the world on time.
Posted by Mark W. Danielson at 12:01 AM

Mark, this is one of my favorite posts ever. Hippos can be unbelievably dangerous, but I love them.

No doubt hippos can be extremely dangerous. In fact, hippos in the wild cause more human deaths than crocs. However, those born in the Magic Kingdom and have had special handling since day one could be dressed in tutus and taught to dance:)

I would love to meet Tucker, Mark. Petting a hippo is on my bucket list. At least, it is now!

i have just found your blog post while doing some research background on tucker. i love this guy! he is soooo adorable and precious. i'm a frequent zoo visitor and have seen him maybe five times now. today was his most active, he was splashing about and doing rolls in the water. he loves his new pool! if anyone is interested in keeping updated you can chk out my photos and videos of him at these links. cheers mark and thankx for getting tucker here!

Kim, Tucker is one hippo that's hard to resist. Glad you're keeping an eye on him. Sounds like he's adapting well in his new home. Hopefully he's taken his last flight.

Good information. Also, Visit this page to learn more about surveys that will reward you for taking part and for your purchases.
fedex com/welisten