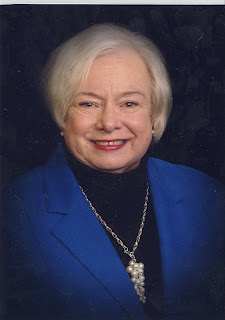 We cap off the opening week of Murderous Musings with some thoughts from Guest Blogger Fran Rizer, author of the Callie Parrish Mystery Series for Berkley Prime Crime. Fran obviously has a morbid (make that mortuary) sense of humor. That she is a retired public school teacher may seem obvious from her nursery-rhymish titles. The first book was A Tisket, A Tasket, A Fancy Stolen Casket, the second will be Hey Diddle Diddle, the Corpse and the Fiddle.

Lizzie Borden took an axe
And gave her mother forty whacks.
When she saw what she had done,
She gave her father forty-one.

Once upon a time, there was a little girl who loved that rhyme. I was that child. My fascination and delight with this poetic effort revealed my interest in murder at a very young age. I read avidly about Lizzie, Jack the Ripper, the Boston Strangler, Ted Bundy, and, of course, Truman Capote’s In Cold Blood.

Then I saw Susan Smith on television begging for the safe return of her children. She lived only about an hour’s drive from my home. I doubted her sincerity but was still horrified when she confessed.

Susan Smith made me aware that my intrigue with murder isn’t the act itself. My attraction is to entertaining reading. It’s not murder I like; it’s stories about it. In my earlier years, I’d devoured true accounts, but because of their distance in time and place, those words had seemed like reading fiction.

This was a relief. It’s easier to confess, “I love murder mysteries,” than, “I love killing!”

Having read this week’s initial blogs and feeling honored to be a guest on Murderous Musings, I wanted to address my personal thoughts on murder first and close with a few words about another favorite topic of mine – research.

I always knew that someday I’d write a novel, and it would be a murder mystery. I also realized that many people are tired of the horrific news on CNN and that real murder is tragic and heart-breaking. When I retired from teaching, I decided to take a light-hearted approach to my first murder mystery. That’s how the Callie Parrish Mystery Series was born, and I was tagged the writer “who puts fun in funerals.”

Asked why my books are southern-based, I tend to answer, “Because you write what you know, and that’s what I know.” That’s partially true, but I also write about murders and mortuaries, and I’ve never killed anyone, personally known a murder victim, nor worked in a funeral home. I used to tell my students, “Write what you know, and if you want to write about something you don’t know, research it!”

A couple of years ago, at the visitation for my uncle’s funeral in Aiken, SC, I began chatting with an employee who’d recently graduated from mortuary school. I asked a simple question about casket locking mechanisms, and he invited me downstairs to see for myself.

He showed me how to lock and unlock different models. I asked and he answered a thousand questions. Well, at least a hundred. I confess, I also climbed into a few caskets to check out the difference in the linings and mattresses. When we finally returned to the visitation upstairs, I found my family frantically looking for me.

“Where were you this time?” my son asked.

“Researching for the book,” I replied.

When the book was completed, I sent it on its merry way to New York. I was fortunate enough to get a great agent who got me a deal with Berkley Prime Crime. The third Callie Parrish book will be released October, 2008.

Recently, a cousin called me from Georgia. “I went to a funeral today,” she began.

“Nobody you know, but I was telling a friend that my cousin writes books that take place in a funeral home. This good-looking man asked if you were from Columbia and then proudly announced that he’d taken you on a tour of the funeral home where he used to work. He wants to know where your next book-signing will be.”

As much as I appreciate the opportunity to blog as a guest on Murderous Musings, I need to hit the road. I’m headed to a Georgia funeral home on a research trip!
Posted by Chester Campbell at 12:00 AM

Fran, just what were the circumstances surrounding your rick uncle's death?

(I've been trying to post today, but have been having problems.)

Great article Fran. I think the blog servers were off-line this morning and I was afraid I wouldn't get to comment.

It's funny how we follow murders but seldom follow the victim once he's out of the coroner's hands.

I recently finished your 2nd book and love Callie and Jane. Great characterization. I never knew a girl who had such adventures with underwear!

I forgot to mention I took your advice and went back to catch Beth's article. I found it chilling.

Fran, I thoroughly enjoyed your article. it made me want to go out do research!

Just wanted to welcome you aboard the blog, Fran. I look forward to reading future posts. Mark